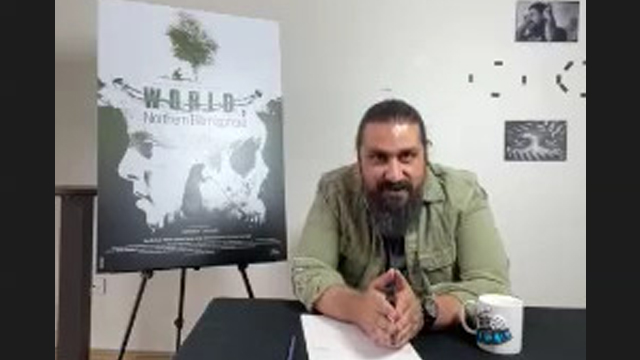 World, Northern Hemisphere, Tehrani’s first fiction feature film after directing over 30 short films and documentaries, is a message from the director to this world where war continues to rage nowadays, by revealing the scars of the Iran-Iraq War through the perspective of a 14-year-old boy named Ahmad living in a conservative region of Iran.

Tehrani attended an official interview held on stream, considering the situation of COVID-19, on November 3.

“Khuzestan Province is located in the southwest of Iran,” he started, informing about the region appearing in the film, where the Iran-Iraq War began and landmines or bomb damages are left behind by the Iraqi army still as it was even today. He mentioned that they were informed about a local’s death by means of a landmine buried in a town called Shush, where they photographed, just a week before their arrival. As concerns of the management of the crisis, they hired native guides to know where the mines were, and also provided special insurance for each staff member.

Tehrani himself experienced the fear of dropping missiles, which he still remembers with a sense of presence, at the age of 6, too young to understand what kind of war it was.

In fact, the first, but rejected of the heaviness of the word “war”, title of this film was “Stories I’ve heard of war”, since this film was targeted on brushing up the difference between the population who heard of the war and those who have actually experienced the war. “This inspiration was clearly received by the younger staff members, since they seemed to be half amused and not horrified by the past war held in the location,” he said. “Most of the staff were young men who had never heard of the war, so they listened with interest to the stories of the local old men and gladly collected items, such as bullets, left over from the war.”

On the other hand, wars are still happening in various regions of the world, not only in Iran, or the “Northern Hemisphere”. “If you look at this world from a bird’s eye view, war is a problem for all of humanity,” he commented, alluding how this global issue is unclosed for everyone without exception.

Nextly, in the story of World, Northern Hemisphere, a girl, at the age of 14, is pressured to marry her cousin, but he commented that this habit is no more in general in someplace in Iran, such as the capital. Yet, there are still some populations believing in the practice, for instance, the necessity of marriage in cousins, or the obligation for women to be married from the age of nine, on the western and eastern sides near the border, the western side closer to the Arabs, and the eastern side closer to Pakistan. “The mother in this film says that she will never let her 14-year-old daughter get married, but in an area where many people believe 9 years is the marriageable age, 14 is too late,” he said about the film.

In addition, Ahmad, also 14 years old, was not originally drawn as it’s shown in the film, the head of the family, and was actually planned to be part of “a family with a father who is crippled and his son had no choice but to work,” according to Tehrani. Despite that, in the area, the actress, recruited from the region, refused to act her mother role by virtue of the restricted culture, forbidding a stranger to play the role of her husband even if it was in the film. To overcome the taboo, the director chose to change the script and ask the father to have already passed away. Tehrani said with intention, “you can think of it as an area that is strangled by such strict customs. It is often misunderstood, but this has nothing to do with religion at all. It is a traditional custom of the region.”

“But that’s not all,” he continued. “Another problem is the issue of race, symbolized by the fact the mother says that the bones she picked up in this film “don’t belong to Iranians”,” said the director, who met and saw this issue for the first time 21 years ago, in his journey, with astonishment. “I had never dealt with that issue in any documentary before, so when I was making this film, I wanted to remember the time and try to incorporate what I saw and was inspired by.”

Moreover, Tehrani, directing over 30 shorts and documentaries throughout his career, disclosed his aim of shooting a fiction feature film, the expectation to be more narrative about their harsh location they had to survive.
During the shooting period, working with staff, the first job for all of them, he said, “it was so hard to think of anything happening to the staff or local actors, and I felt very stressed.” The director hired the local actors, amateurs for most of them, to photograph in the dangerous area, difficult to get permission to film, and carried a number of young and motivated staff, interested in the region of the scars bearing after the war. “Thanks to them (staff), we were able to get through the difficult 40 days of filming,” he praised.

In spite of the number of such amateurs, there are some quite challenging scenes in the film, the pigeons at the beginning and the mine-explosion in the second half. He replied, “The scene where the pigeon’s head is actually taken off was only taken once, and I was bewildered whether it should be actually taken or not, but now, I’m glad I did it, after all watching the film.” He went on, “The landmine scene was hard. The woman on the mother’s roll told me that if I wanted her to sob, she could only do it once, since she had actually experienced the war. Of course it ended in one take, however, the staff behind the camera started crying. It still brings tears to my eyes to remember that I let her do that, even though she was still in pain from the war.”

Tehrani summed up the interview, “Japan is a country that we respect and admire, so being able to perform there as the world premiere was a great relief,” after all the hardships they had experienced.