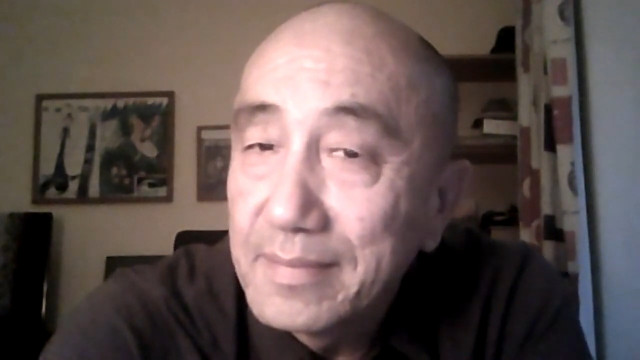 Didar, a smoldering poet whose creations were unrecognized in the modern literary world, was living in days of agony, watching his college classmate succeeding in the food and beverage industry, offered jobs never matching his creativity. Reminded of a 19th century poet who was executed for defying authority, Didar comes to understand the mission a poet must take on…
Darezhan Omirbaev, the up-and-coming Kazakhstan director, whose A Student, boldly depicts Dostoevsky’s Crime and Punishment in contemporary Kazakhstan, well received at the 2012 Tokyo International Film Festival, had its world premiere at the festival with his latest film Poet.

Related to the issue mentioned in the film of significant globalization of language shown through pure poetry literature, which replaces the issue of “art or commerce” in the film industry, Omirbaev was firstly asked about the position of the Kazakh language in Kazakhstan, where both Russian and Kazakh are used.
He answered, pointing out about the vast territory of Kazakhstan, roughly the same size as Europe, but consisting of only 18 million population, the rest made of more than 100 other ethnic groups, “Kazakhstan is a racially diverse country like Switzerland, the United States, or Belgium. As for the language, Kazakh is the official language in Kazakhstan, however, the reality is that there are many people who use other languages due to various historical reasons.” He added, ” the globalization of languages, or “big languages” as they are called, is pushing other languages away.”

This concern is presented using France as a lesson of this problem, in the beginning of the film, where the director himself appears on the screen. “Even in a country with such a wonderful culture and language like France, more than half of the academic papers are already written in English,” he said. “The problem is that in order to be published in an international academic journal, it is necessary to write in English, and the journal itself is composed only of English.”

Globalization of language issues is hitting all over the world in progress, not only for France nor Kazakhstan. Asked about the feeling of fear of losing its own culture and language in Kazakhstan, he commented, “life is full of risks, so I think I just have to keep making films like this and keep telling people about the problems.”

As for the controversy of art vs. commerce, he defined it as an eternal problem that can’t be solved. Indicating about the film industry, his workplace, where no prefered films can be made without funds, he compares it with novels or paint pictures which you manage to be creative if you have a piece of paper and a pen or a paintbrush.

“This problem has existed for a long time, but I think there is a way to alleviate it. That is school education,” he declares. “I mean to include The Arts in the curriculum,” such as watching 30 to 40 classic films. “If they don’t learn multiplication in school, they won’t be able to solve various problems using formulas, and if they don’t learn to read and write the alphabet, they won’t have a chance to find good books. Moreover, children nowadays spend more and more time in front of the TV and gadgets, so they don’t even have the chance to read books.”
However, he said with intention, “by actively creating opportunities for them to experience art, they can develop a good appreciation for it. As for movies, they are not educated in schools at all, and I think that is why people cannot encounter good movies. We are surprised to find that there are many excellent film works, but no viewers, no audiences to watch them.”