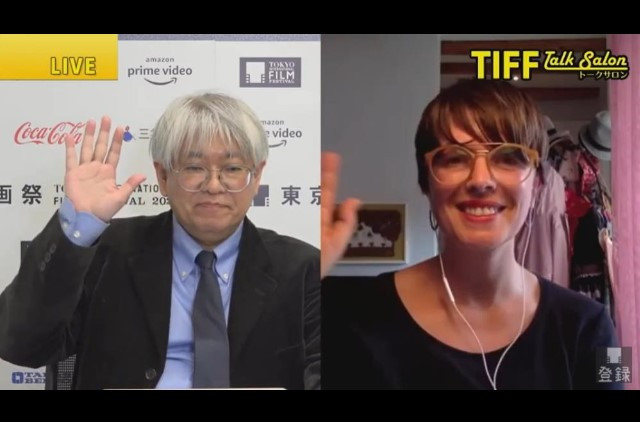 The premise of the Kosovo-set film Vera Dreams of the Sea, which had its Asian premiere in the Competition section of the 34th Tokyo International Film Festival, is simple but hardly simplistic. The title character, an in-demand sign language interpreter in her 60s, finds herself the target of relatives who would deny her inheritance after the suicide of her husband, a respected judge. It’s obvious from the way she’s treated that Vera is not taken seriously because she is a woman, and she knows it. The solution to her problem feels honest and, given the circumstances, courageous.

At every juncture of the story, Vera (Teuta Ajdini Jegeni) is met with challenges to her self-image as someone who has managed to stay above the fray in terms of the social inequities that govern life where she lives. She confides in a colleague of her husband’s in order to hush up his suicide, which would throw a scandalous shadow over her family. Later, she realizes that she has made herself beholden to a man she didn’t know as well as she thought.

Her husband’s cousin, a ne’er-do-well who lives in his hometown and takes care of his family home, demands that Vera sign over the house to him, saying that her husband sanctioned such a deal. Vera wants to sell it (a highway is going through, thus making it more valuable than it really is) and give the money to her struggling-actor daughter, the only heir she has. It soon becomes clear that there are other forces behind the cousin’s demand, and Vera feels threatened.

During an online Talk Salon session on November 7, director Kaltrina Krasniqi told TIFF Programming Director Ichiyama Shozo that the script, written by Doruntina Basha, had intrigued her because of the main character’s complexities. “I can’t recall a play or a movie where a woman of Vera’s age from a small country like Kosovo is the protagonist,” she said. “She comes across as a woman who knows herself, but when her husband suddenly dies, she is completely stripped of her agency. That is what I wanted to explore.

“On several levels she resembles my own mother, who divorced my father in the 1980s. As with Vera, she had to fight for her legacy, and today many women face the same kind of economic disparity as Vera does, because they are seen as being less a person by society. Though this is a story from Kosovo, I thought the theme was universal.”

What makes Vera special is her profession. She “inherits” her sign-language proficiency from her mother, who was deaf, and it provides her not only with a well-paying profession, but an identity in a world where women have nothing of their own. “She represents the deaf in a world where they are not heard,” said Krasniqi. “For that reason, this gift is very precious to Vera.”

It was thus very important to cast an appropriate actor, and the task was quite difficult. “It took a year to find someone,” said the director. “Not many women in Kosovo born in the 1950s have pursued careers in the arts. I traveled from Kosovo to North Macedonia to Albania looking for someone, and I finally found Teuta Ajdini Jegeni, whose background was theater in Macedonia. She had limited experience in film, but her dedication to her craft turned out to be total.”

What Jegeni portrays is not just a woman who has to stand up for her economic rights, but someone who has to convey a continuum of progress that has been mostly overlooked in the Balkans. “My great grandmother was illiterate,” noted Krasniqi, “and my grandmother could barely read and write. It’s only been my mother’s and my generation that have been able to get an education. In the end, when Vera finally smiles, it’s because she has put up a fight and gained something in the process.”

This process necessarily relates to Vera’s daughter, Sara (Alketa Sylaj), a theater actress who is barely getting by. As a woman, she has no claim to her father’s inheritance, so Vera’s insistence that she keep her own to pass on to Sara has special significance. “Sara is a vital aspect of the story,” says Krasniqi. “She is very different from her mother, and that’s why she challenges her mother. The play she is doing in the film echoes some traditions that see women as being sacrificed for the community. Meanwhile, her own mother is going through just such a sacrifice in the modern world.”

One viewer commented on the color tone of the film, which seemed purposely muted, and the director concurred that, indeed, that was her aim. “I worked closely with the cinematographer, Sevdije Kastrati, to create three phases: one phase colors the film to look like late winter and spring; the scenes depicting the theater play with Sara had a different palette; and the scenes with the sea had their own special look. The thing is, the city where the movie is set is grey to begin with. Vera’s apartment was built in the 1970s and we really wanted to make it look true to the era.”

The sea, of course, is part of the title, and one viewer wanted to know its thematic importance. Krasniqi seemed to anticipate the question. “In Albanian, ‘Vera’ means ‘summer,’ and the title of the script I received was Summer Dreams of the Sea, which conveys a sense of longing. Kosovo is a landlocked country and the notion of the sea is very romantic, it represents peace and hope. After the suicide of her husband, the sea has great meaning to Vera.”

The title also made it essential for the production to broaden its funding beyond Kosovo, which “has always had a very small budget for film production,” said Krasniqi. “And in Europe, many films tend to be state funded. For us, it is natural to work with neighboring countries, and in any case, Albania faces the sea, so it was important to get those scenes.”