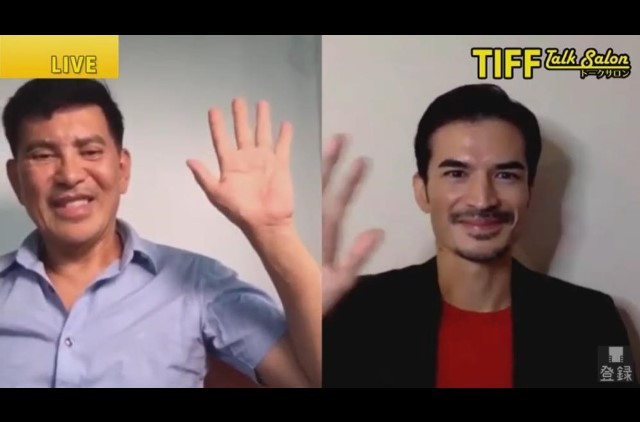 Acclaimed Filipino auteur Brillante Ma Mendoza returned once again to TIFF on November 7—if only virtually—to appear with actor Shogen at an online Talk Salon to discuss their Philippines-Japan co-production GENSAN PUNCH, which is screening in the Gala Selection of the 34th Tokyo International Film Festival.

TIFF and Mendoza go way back. The festival gave him a retrospective, “The World of Brillante Ma Mendoza,” in 2015; the director contributed a short film to the 2016 Asian Three-Fold Mirror omnibus, co-produced by TIFF and the Japan Foundation Asia Center; and he served as the 31st TIFF Competition Jury President in 2018. This year, TIFF presented the world premiere of Mendoza’s new film Payback in the Competition section, as well as GENSAN PUNCH, and the director also appeared in the Conversation Series at Asia Lounge, chatting with prolific actor Nagase Masatoshi.

The film has been one of the 34th TIFF’s biggest draws, partially because of Shogen, a local favorite in a breakout role, and partially because the film follows the true-life story of a Japanese man, Tsuchiyama Naozumi, whose dreams of becoming a professional boxer in his native Okinawa are repeatedly rebuffed by the local authorities. Nao (Shogen) has had a prosthetic leg since an early childhood accident, and the boxing council rejects his application for a professional license because the leg is deemed “extremely dangerous” in the ring.

Nao decides to go to General Santos (from which “Gensan” is derived), the Philippines, a town that calls itself “Home of the Champions” after Gensan-raised Manny “Pacman” Pacqiao has become a boxing world champion in a number of weight classes. Nao meets his fellow boxers, most of who are poverty stricken, and begins training with Rudy (Ronnie Lazaro), a former champion who is reminded of his younger self by Nao’s commitment. Rudy helps Nao get a license to box, and the pair begin winning. But then it comes time for the most important match of Nao’s career, and corruption rears its ugly head.

TIFF Senior Programmer Ishizaka Kenji moderated the Talk Salon and began by mentioning that he’d heard Shogen had been the driving force of the project. “How did it all began, can you tell us a little more?” he asked.

Said Shogen, “I first met Mr. Mendoza at Busan International Film Festival, and shortly after that he came to Japan as the head of the jury for TIFF. I pushed little by little and then I visited him in the Philippines. It was my passion project, so I just went with it.”

“I’ve met a lot of producers and actors who approach me with projects at festivals,” the director said, “and I always want to collaborate with actors from different parts of the world. But of course you can see if they’re really interested. If they [are], they really pursue you. After Shogen came to the Philippines, I realized that he was really serious. When I said ‘Yes,’ I told him I would commit myself completely, meaning that I would be involved in the research, the development of the story and finding the right location.”

Shogen recalled, “Mr. Mendoza visited the Asian Focus Film Festival in Fukuoka after TIFF, where he held a workshop and talked about the filming method for Ma’ Rosa, which was a good opportunity for me to learn how he directs. He mentioned that actors should immerse themselves in the story environment, and he invited me to the Philippines. I went over to Gensan and worked out with the boxers in the gym, and when he was shooting Payback, he invited me over again, so I could experience being on the set, and he also gave me a small role in the film.”

Mendoza admitted it was his first sports film, so “I had to immerse myself in the genre. What became clear for me is that it wasn’t so much about the boxing, but about the human beings and the lives of the characters. We can always watch an actual boxing match, but we’re watching a movie, [so it must have] a narrative.”

Ishizaka asked Shogen about crossing borders (the TIFF theme this year) to make the film. The actor responded, “The other day, Mr. Mendoza met Nagase Masatoshi for the Conversation Series at Asia Lounge, and discussed how much fun the Filipino crews have during shooting. For my role, I had to alienate myself since I was playing an outsider, so I tried not to get caught up in this whole mood. Unlike in Japan, Filipinos really display affection and treat you like a family member. The Mendoza team is like this, they’ve been working together for a long time. They embraced me and we shared three meals a day together.”

Asked about how Shogen and Ronnie Lazaro had worked with the director to develop their very convincing onscreen rapport, Mendoza said, “It was quite different from what I usually do with my actors, because Ronnie and Shogen didn’t have much time together. Ronnie came over and we talked about his character, and I told him he was free to [portray him] however he pleased. With Shogen, we were able to cultivate a special relationship. He’s a really committed actor, and he went out of his way to deliver his character. He stayed in my house and we talked a lot, and I think that helps not only for the filmmaker, but for the actor. Getting to know one another deeper, as a human being, as an artist, as a friend, is important. The process, the journey is [more] important.”

Wrapping up the session on a question about the Japan-Philippines relationship, Mendoza told viewers, “I’m only one of many filmmakers from the Philippines, but it’s a known fact that I have a close relationship with the Japanese and more specifically, with TIFF. I have a future project that will be shot in Japan, with Japanese and Filipino actors and crew, and I think the relationship will continue and become better and better.”

Shogen had earlier appeared in person, along with his costars Minami Kaho and Kisanuki Maya, producer Yamashita Takahiro and the film’s inspiration, Tsuchiyama Naozumi himself, following the packed Japan premiere of GENSAN PUNCH on November 5.

At the event, Minami told the audience that she first met Mendoza in 2017, when they were both serving on the TIFF Competition Jury, and that Shogen’s relationship with the director had also benefitted from time they spent at TIFF. “That’s what international festivals are all about,” said the actress, “the spirit of bringing people together.”

Yamashita concurred. “It took us a long time to make this project,” the producer said, “and I’m very grateful to TIFF. Both Shogen and myself have such strong memories of this festival. This year’s theme is Crossing Borders, and we’re very happy to have been selected.”

For his part, Tsuchiyama admitted, “It’s very strange to see a film about my own life. I didn’t win any titles or break any records, but I feel this helps me reciprocate for all the support I’ve received.”

Asked how long he had trained to get his boxer-like physique, Shogen responded, “It took about a year of training five to six days a week. Filming came to a halt because of COVID last March and we didn’t resume again until this June. But it’s the mental preparation that’s the hardest.”

Fortunately, Shogen had expert advice. As Tsuchiyama explained, “We knew each other long before filming started, he’s like an older brother to me. I’d never thought about what it means to be a boxer, what it takes to prepare and what my emotions were before a match, but those are the questions he asked me.”

“I went to the Philippines about six months before the shoot,” said Shogen, “and the director and I shared life stories with each other to build a bond and trust. Mr. Mendoza is known for not using a script, but because I trusted him, I seized the moment.”

Minami recalled, “He would tear a little piece of his notebook [with lines] and give it to you on the day of shooting. What really took me by surprise is that you didn’t know your cue, you didn’t know when the camera was rolling. I realized that he wanted us to live the lives of our characters as soon as we stepped on the set.”

The visceral boxing matches look real because they were real. “Normally when you shoot an action film, you can plan how the moves will go,” said Shogen. “But Mr. Mendoza wanted it to be more authentic and had us stay true to reality.”

He noted, “There’s an overlap in Nao’s story of becoming a boxer with my own story as an actor—to seek better opportunities, as he did, I also left Japan and went overseas.”

“My life motto is quite simple: give it your all,” said Tsuchiyama.” I could dedicate myself to boxing, and pursued my dreams in the Philippines. I think it’s not a bad thing at all to give your all to something.”

GENSAN PUNCH will soon be available in Asia on HBO GO.