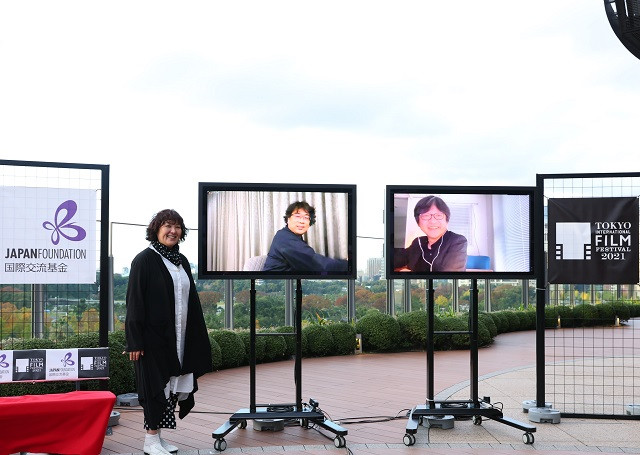 The eighth and final session of the Conversation Series at Asia Lounge brought together perhaps the most intriguing pairing yet of Asian auteurs: Korean luminary Bong Joon Ho, a household name after the global success of Parasite (2019), and acclaimed animation director Hosoda Mamoru, whose new film BELLE was the talk of this year’s Cannes Film Festival and a huge box-office success in Japan over the summer. The men met virtually on November 7, as moderator Araki Keiko joined them in person in the outdoor garden at Tokyo Midtown Hibiya, a new venue of the 34th Tokyo International Film Festival (TIFF).

Co-presented by the Japan Foundation and TIFF, with an advisory panel once again headed by Palme d’Or winner Kore-eda Hirokazu, the series has featured acclaimed filmmakers from Asia and beyond each afternoon from October 31 – November 7.

Araki, who serves as the Festival Director of the Pia Film Festival and sat on the Asia Lounge advisory panel, noted this was “a dream session that the whole world is watching.” 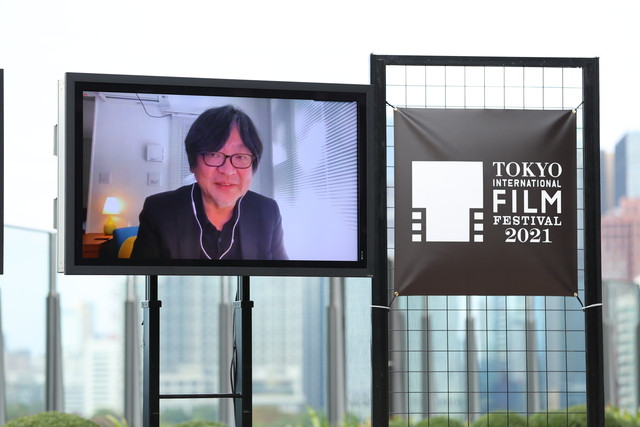 “I’m here preparing two films at the moment,” Bong told him. “The other will be a Korean animation film.” This remark was met with great excitement by Hosoda, but before he could ask him about it, the Korean director graciously noted that he’d seen BELLE recently and found it to be “gorgeous. I’d like to hear some stories from you about it. I’m sure it’ll be a big hit in the U.S., too.”

“Thank you so much,” said Hosoda. “Making the film during the pandemic was very tough, but fortunately none of my staff was infected with COVID. The production was delayed, and Cannes was delayed as well, so it worked out that we could premiere it at Cannes. After we’d all gone through the pandemic, the festival made me realize the power of film.”

Bong immediately drew a connection between the film, which takes place between online and offline worlds, and “both Cannes and TIFF, which were conflicted about which way to go with their festivals—in person or hybrid or online? I think people related to BELLE even more because of the pandemic.”

“I’m so honored to hear that,” said Hosoda. “I’d been thinking of the story prior to COVID, but we had to produce it right in the middle of the pandemic, and of course we were influenced by that. On the other hand, working together in the same location, we were able to realize the importance of meeting people face to face. I wanted to stress that.” 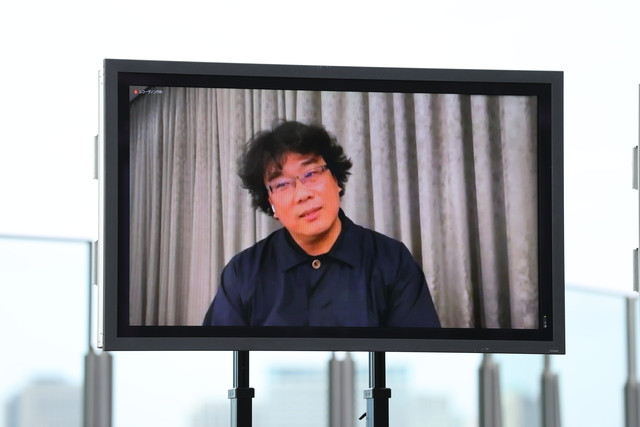 Said Bong, “BELLE is a tale of two worlds: the countryside where Suzu lives, with beautiful backgrounds that you’ve created. But in (the massive online space) U, she becomes Belle, who exists only online. You did something similar with Summer Wars, but this 3D artwork was amazing. How did you create that?”

“As a matter of fact,” said Hosoda, “I investigated what kind of designers exist in the online world, since I wanted to make sure that the person who created the world of U could live in that world. I managed to find a 27-year-old designer living in London, without any film experience, and I feel really fortunate to have been able to find such a talent.”

“I found another designer, a student living in Texas, who had the power to create very lively characters, so I asked him to design the character [of an American baseball player]. Belle’s design is by Jin Kim of Disney. The film is unique because we crossed borders and I collaborated with a lot of different people. Maybe that’s the situation because of the pandemic. Usually, animation companies are separated by national borders, but this collaboration revealed we can make a new kind of animation. So Mr. Bong, you might be able to do the same thing.”

“Honestly speaking,” admitted Bong, “this isn’t on my official biography, but the very starting point of my career was a short animation I made in 1992, a stop-motion film that I made in a university film club. I was shooting it one frame at a time, and we managed to shoot only 2 or 3 seconds of the film despite all our effort. So that’s why I turned to making live-action films.”

Hosoda grinned widely. “When I saw The Host and Okja, I could sense an animation spirit in them. I thought they seemed different from other live-action films. Now that I hear this, I understand why I felt that way.”

“I don’t want to show it to anyone, only members of my family,” said Bong. As Hosoda laughed, he continued, “If it got out, it would be a disaster. In The Host, there was a creature, and there was a pig in Okja, and I used CGI animation. So based on that experience, I’d like to make an anime like Toy Story or Wall-E.”

“I’m so excited,” said Hosoda, with genuine eagerness. “When I went to film festivals overseas with The Little Girl Who Leapt Through Time, everyone was asking why I still did hand-drawn animation rather than CGI. Of course that’s also great, but I don’t think we should stop drawing by hand. I think we can make hybrid animation. There are two techniques, like using a pencil or a paintbrush, and it’s not like one is better than the other.

“I think hybrid can make things better. You said you’re making a CGI anime, is that because of your [previous experience] or is there something else you’re after?”

“It’s my first time trying to make animation, so I know it won’t be easy” said Bong. “I want to create a new tone, a new visual [language] that you’ve ever seen before. It’ll be CGI but more humane. I don’t want the texture to be cold, I hope it’s like something you want to touch. I think CGI has really improved. I’m looking for the sensitivity, the aroma of [hand-drawn anime]. I’m not sure how I can make it. It’s a big challenge. I’d like to visit you and get some advice.”

Hosoda noted, “As we make animation, we have this dilemma, because we have a traditional method of doing it that we tend to rely on. We depend on the audience’s literacy. But there’s got to be a new way of expressing it. As animators, we should probably be challenging ourselves a lot more than we’re doing right now. I think you can break through and create the animation from a completely different perspective, Mr. Bong.”

Said Bong, “I’m not expecting too much, just praying that I can complete it. But you’ve been making films every three years or so. BELLE must be your ultimate creation. The theme of the family, as well as the depiction of two different worlds, and finding ways to overcome difficulties—you’re always deeply exploring those themes in your films.”

“But I’m more interested in your film,” enthused Hosoda. “Isn’t there something you can tell us about it?”

“I guess I can talk about the inception of the project,” Bong relented. “It’s a story about the deep sea, based on a French scientific novel. My wife found the novel in a bookstore. It was very beautiful visually, and there were deep-sea creatures like I’ve never seen, very mysterious, they were just like anime characters. They live in the deep sea without light 365 days a year, and they’re the protagonists of my story. They’re going to come into contact with a human.”

Speaking for all of us, Hosoda told him, “I think everyone can anticipate great things from your [animated film]. I think it will be dynamic and border crossing.”

“Like you,” said the Korean director, “I’ve also made a lot of films in which family is a theme. At the ending of BELLE, there’s a small moment that communicates huge emotions. Suzu experiences immense difficulties before coming back to her family, and when her dad talks about cooking the fish and sharing it, that really moved me. It gave me a huge emotional jolt. Yakusho Koji-san played the role of the father, and after watching the film, I went home and made some fish.”

Noting that it was Hosoda’s third collaboration with the actor (after The Boy and the Beast and Mirai), he continued, “I’m hoping I can make a film with Yakusho Koji-san. He’s also worked with Kurosawa Kiyoshi, Nishikawa Miwa and Kore-eda Hirokazu, so I’m jealous of you all. I’m thinking about what kind of role I could write for him, and I’m thinking maybe he could be a slightly older trainee at a manga studio run by a young artist. He wants to draw his own manga but struggles… and he’s abused by the young artist.”

Announcing that time was regrettably running out for the session, Araki asked the two men if there were any films they find themselves turning to for inspiration or comfort. “When I feel like I can’t go on anymore, I watch Hitchcock’s Psycho and Kurosawa Kiyoshi’s Cure,” Bong responded. And then, without a trace of irony, he added, “They make me feel calm and peaceful.” 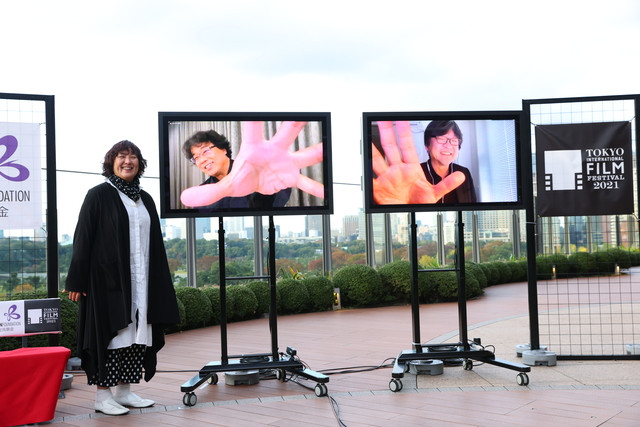 Said Hosoda: “When I was making BELLE, I watched Silence of the Lambs so I could learn from the main character’s sense of paranoia. But I was drawn into how wonderful the film is, and I stopped caring about whether I learned something. I also like watching Kurosawa Akira’s Yojimbo. I really want to be able to make a film like that, to get to that level. I always go back to it.”

Bong broke in, “But The Boy and the Beast has a character, Kumatetsu, who reminds me of Mifune. I thought you must’ve been inspired by Yojimbo when I was watching that.” Teased Hosoda, “Maybe that’s because Mr. Yakusho is playing the character.”