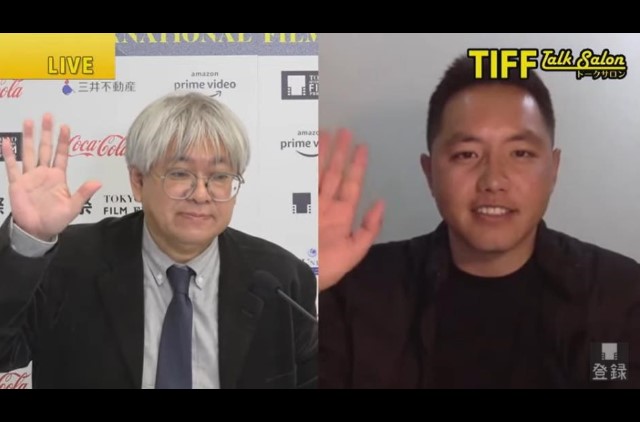 The mystical power of the forest and the mysterious nature of man collide in Jigme Trinley’s nerve-wracking, rib-tickling debut One and Four, making its world premiere in the Competition section of the 34th Tokyo International Film Festival.

On November 6, the writer-director joined the festival remotely for a Talk Salon session with TIFF Programming Director Ichiyama Shozo, and told him that One and Four had been his graduation film at the Beijing Film Academy.

“It’s a great film for a graduation work,” said Ichiyama, clearly impressed. “The screenplay is really interesting—is it original, or did you adapt an existing story?”

Responded Trinley, “It’s based on a novella. Before I made the film, I wanted to shoot in Tibet and I wanted to do a genre film, and my friend recommended the novella. The story is like Rashomon, with all the lies and people meeting each other in a [restricted] space. It’s like psychological warfare. That was very appealing to me.”

Ichiyama noted that audiences—who had packed the theater at two screenings—had mentioned Rashomon but also said it reminded them of The Hateful Eight. Had Trinley seen Tarantino’s film? “When I read the story, Rashomon came to my mind immediately,” he said. “As you listen to the characters, everything becomes more confusing and mixed up. When we were shooting in the snowy forest, I also thought of The Hateful Eight, and how the characters were trapped together in one room.”

Double-crosses, mistaken identities, mistrust, distrust, poaching and gnawing hunger: these are the film’s main concerns, and Trinley briskly jump-cuts backward and forward in time, zooming in and out on little details, helping ratchet up viewer doubt. His visual style is already quite polished, with an assist from acclaimed Tibetan filmmaker Pema Tseden’s regular DP, Lv Songye, and extra oomph added in the editing suite. Tseden just happens to be Trinley’s father, as well as the film’s producer, and it’s a joy to see the younger man tackle some familiar tropes with added youthful panache.

In One and Four, Sanggye (Jinpa, star of Tseden’s Jinpa and Balloon) is a sad-sack Tibetan forest ranger who seems to spend his days alone in a remote lodge drinking and writing logs of the outpost’s non-events. But one pre-dawn, he’s awoken by a man from his village, Kunbo (Kunde, the first of the “four” of the title), who’s there to deliver divorce papers from Sanggye’s wife. Or so he says. Later the same morning, he’s awoken again by a regional forest cop (Wang Zheng), who’s bloody, tense and very hungry. The man tells him he was in a car accident after a high-speed chase after a poacher, who also crashed and is now on the loose.

But Sanggye, while perpetually groggy, smells a rat. Something’s just not right about this cop, and suspicions are further aroused when another man shows up who also claims to be from the regional forest patrol. This one’s even more bloody and bruised, but he knows Sanggye’s boss. Where does the truth lie? By the time Kunbo returns, lugging the poacher’s bag of antlers and fox pelts, and the counteraccusations ratchet even higher, it’s nearly impossible to discern. The only thing that’s clear is that the put-upon park ranger is in imminent danger.

A viewer wanted to know whether the actors are famous in China. “They aren’t that famous,” said Trinley, “but the main character, Jinpa, and Kunde, who played Kunbo, are busy Tibetan actors. People who watch Tibetan film would know them. Their characters in the film are really the opposite of themselves. Jinpa seems very strong and masculine in person, but the forest ranger is weak and indecisive. I knew that he would be immersed in the film and play the role really well, and I think he did a wonderful job.

“Wang Zheng (the first cop who knocks on Sanggye’s door) is Han Chinese, and it was really significant to have him in the film because of [his ethnicity]. We all spoke Tibetan on the set and when he came, he would feel really insecure. That was the right psychology for when his character is meeting Sanggye for the first time. I thought he also gave a really great performance. He even put together a whole backstory for his character and showed it to me, and it was a really great help.”

Trinley was asked why he had cast a non-Tibetan. “The Han character already appears in the original novella,” he explained, “and by having one character who is Han Chinese, I thought we could expand interest in the film [beyond Tibetans]. Also, his presence helps create a greater element of instability in the narrative.”

Another viewer wondered if the director planned to make only Tibetan films in the future, and he responded, “When I shoot, I want to incorporate themes that relate to my own experiences. I was born in Qinghai, Tibet, and grew up in Beijing. When I was in high school, I went back to Qinghai to learn the Tibetan language and culture. I felt it gave me a greater perspective and made me multi-dimensional. I want to diversify in the future, and to incorporate all sorts of elements and cultures in my films. But they have to be topics that I can relate to.”

The weather is a prominent character in One and Four, which takes place on a snowy mountain and a primitive, unheated hut, with the threat of an impending blizzard impacting the characters’ sense of urgency. “It was a lot different from the other films I’ve made,” acknowledged Trinley when asked about the difficulties of shooting in such a location. “We shot in an icy valley, and it was very cold. It was hard, sure, but everyone loved film and the cast and crew were really passionate. The weather was cold, but everyone was warm.”