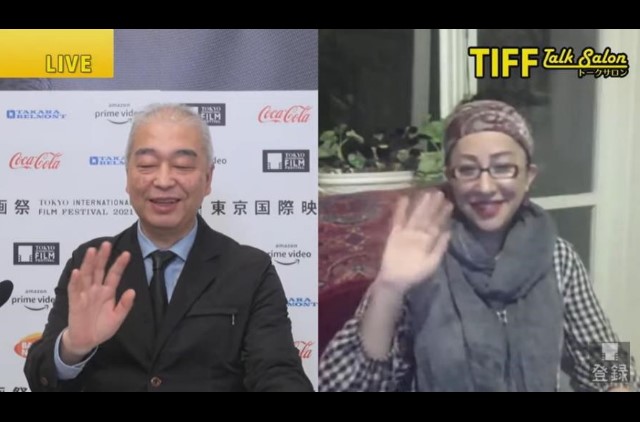 The latest film by Iranian-Australian director Granaz Moussavi, When Pomegranates Howl, a world premiere in the Asian Future section of the 34th Tokyo International Film Festival, depicts a Kabul that has probably changed substantially in the last six months, after the Afghan capital was taken over by the Taliban following 20 years of fighting.

The film centers on a nine-year-old boy, Hewad (Arafat Faiz), who supports his family by selling groceries and daily supplies from a street cart after his father was “martyred” in an explosion. In a touching bit of irony, Hewad, after befriending an Australian news photographer, tells his friends that he’s going to become a movie star, after which he will lift his family out of poverty and become world famous. He even has a head start on his dreams: a pair of cool sunglasses he found during a street brawl.

The writer-director, talking from her home in Melbourne to TIFF Senior Programmer Ishizaka Kenji during a Talk Salon session on November 6, said that even before the Taliban arrived in Kabul, producing a movie there was extremely difficult. “For pre-production, I had to live in the city for 18 months,” she said. “And the situation was always very hard, like living in a war zone. There were bombings all the time, making it difficult to scout locations. Whenever we returned to where we parked our cars, we had to check them carefully for bombs. Also, I had an Australian passport, which meant I was at risk there, as well.”

Since the movie is about children and directly takes their point of view, Moussavi felt it was important to represent them as truthfully as possible. “There are many different ethnicities living together in Afghanistan,” she said. “And my aim in all my work, whether it’s my poetry or my films, is to bring people together. So I made sure I included all three main ethnicities when I cast the children, and went all over to find them.” The boy who played Hewad, for instance, is from Jalalabad, to the east. “But one month after I cast him, the IS bombed Jalalabad and he couldn’t return!”

Most of the film’s story centers on Hewad’s struggles to make ends meet for his family, but since he is a child, Moussavi made sure that there was a lot of humor in both his behavior and the dialogue. And while the movie does touch on some social and cultural complexities that affect Hewad’s life directly—his mother, for instance, is being pressured by her mother-in-law to marry her late husband’s brother so that she can go outside the house—for the most part, Moussavi lets these elements speak for themselves. “The pomegranates of the title are a common fruit in Afghanistan,” she explained. “And for me they symbolize the children. In the grey of war, there are these bright red fruits, but they are fragile. They can bruise and fall apart so easily.”

She was clear that her motivation for making the film was her conflicting loyalties to her native land, Iran, and her adopted home, Australia. The idea for the film was sparked by a TV news show she saw some years back (video of which is appended to the end credit roll) where the Australian defense minister talked about an incident in Afghanistan involving the Australian military. “I felt I had to do something, since I’ve always thought of Afghanistan as my neighbor—it shares the same language, the same culture, and the same history as Iran. The only thing I could do was to make a film to tell this story.”

She was fortunate to find an Afghan producer who understood exactly what she wanted to say. “He knew a lot about politics and I learned a lot from him,” said Moussavi. “At first I didn’t think we could shoot in Afghanistan because of the war, and thought maybe we should move to Pakistan, but he said no. Kabul was the only place, because the city has to be a character in the story I tell.”

Though Ishizaka asked her to comment on the current situation in Kabul, Moussavi seemed hesitant to address it in its current form. “Afghanistan has been at war for 30-40 years,” she said. “There were films made there before that time and during that time, and there will be films made afterwards. Afghanistan will always be there, and I only depicted a very small part of it during a very brief time. Maybe it foretells the future in some way, but I want to continue showing the situation surrounding the children of Afghanistan if I can.”