OPEN
Return to List of News
2021.11.06 [Event Reports]
Surviving in a Landscape of Death and Oppression 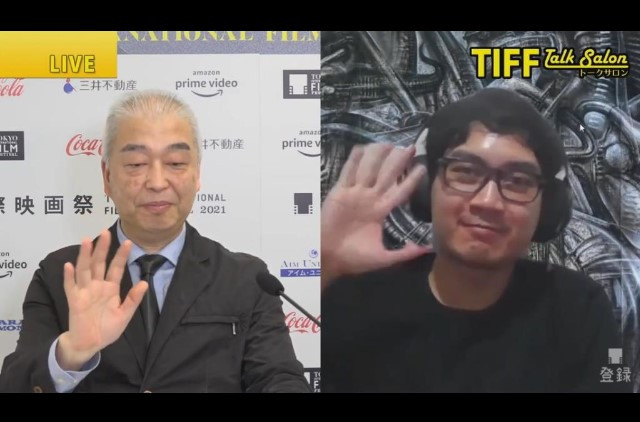 Mikhail Red’s action thriller Arisaka, which had its world premiere in the Competition section of the 34th Tokyo International Film Festival, gains much from the lush forests and rolling hills of Bataan, the province of the Philippines where the infamous Bataan Death March took place during World War II.

Early in the movie, this incident, in which the Japanese army forced starving American and Filipino prisoners to walk more than 100 kilometers, is referenced by a police officer who is helping escort a local official to a press conference under heavy guard. He says his grandfather was one of the prisoners of war and managed to escape by pretending he was dead and rolling off a cliff. “I wouldn’t be here today if he hadn’t survived the fall,” the officer says.

It’s a portentous story, because the convoy doesn’t make it to its destination. In fact, only one police officer, a young woman named Mariano (Maja Salvador), escapes the carnage, and just barely. The tale of her own determination to survive, as she’s pursued by a sadistic and obsessive crime boss (Mon Confiado), conveys her own resourcefulness in the wilderness, but also that other component of staying alive through deadly circumstances—luck, which arrives in the form of an indigenous girl who knows more about the land than Mariano does, including where the bodies and, more importantly, the weapons from WWII are buried. In fact, the title of the movie refers to a Japanese rifle used in battle.

At an online Talk Salon on November 6, TIFF Senior Programmer Ishizaza Kenji asked the director why he had set Arisaka in Bataan and used the Death March as a kind of background theme. “I’d read an article about the indigenous people in that area,” said Red, speaking from Manila. “And over the years they had recovered lots of relics, including weapons, left over from the war, and they actually repaired and repurposed them. In some cases, they had something to do with the cycle of violence in the region as these people struggled to hold on to their lands against encroaching forces of oppression.”

This theme of oppression and liberation, which is symbolized directly in the movie by Mariano’s escape from her hunters and indirectly by the indigenous characters’ decision not to participate in “the cruelty of the world,” as one puts it, was deepened by the idea of the Bataan Death March, said Red, which is the “ultimate story of survival.”

“Part of the reason we made this film was to show the abuse of power by the authorities,” said Red. “Like my previous film, Neomanila (2017), which tackled the drug war, there is a tendency by those in authority to label what they don’t like with terms that justify their brutality. You call someone a pusher in the drug war, then you can explain why you killed him.”

With the indigenous people and their claim on lands that may be coveted, those in power tend to “red tag” them—label them communists. “They can say matters ended up in a shootout with rebels, and no one questions it.” Nothing quite that complicated happens in Arisaka, but the same dynamic is at play when the crime boss confronts an indigenous family.

The girl and the family were played by actual indigenous inhabitants of Bataan, which was done more out of necessity than any attempt at verisimilitude. “It was in the middle of the pandemic,” explained Red. “We had to stay quarantined in our accommodations and couldn’t audition actors, so we found this fully formed family and coached them to play the parts and retrofitted the script accordingly, which was the best idea.” Red and his crew learned a lot from the family about the land and their lives and incorporated it into the script, such as the herbal plants used to heal Marciano’s wounds.

“More importantly, we asked them what they wanted to say to the Philippine public through the film, and we put some of their words directly in the dialogue. The father’s monologue about being water—in other words knowing your relationship with nature in the world—was put right in the script.”

In other ways, the pandemic was completely disadvantageous. “We couldn’t extend the shooting because of quarantine,” said Red. “We had to limit ourselves to 12-hour days, and then we were hit by three typhoons. In the end, I had to use a lot more CGI than what was proposed in the treatment. Everything was supposed to be natural.”

This intelligence prompted a question from a viewer who wondered how the director, whose previous two TIFF entries were Rekorder (2013), which took place in the city, and Birdshot (2016), which like Arisaka, took place in the jungle, differentiated between urban productions and rural ones.

“Well, when you make a movie in the jungle you miss the city,” said Red, “and when you make a movie in the city you miss the country. Thematically, my films are the same, with characters who always find themselves in a maze they have to survive, whether it’s a manmade maze or a natural one. With city locations there are problems with crowd control and noise to contend with, while in the jungle you’re at the mercy of the elements.”

One viewer commented on the casting of Salvador, who usually plays “very cute characters.” Why did he choose her to play an action hero who precipitates some extremely bloody outcomes?

“It’s always exciting to challenge yourself when making a movie, and I thought it would be interesting to change her image,” said Red. “Maja is already a superstar in the Philippines, and here her appearance is stripped to its essence.” He also wanted to attract an audience who might not otherwise be interested in the themes he was exploring. “I make genre films to reach local audiences,” he said. “Many of them may not be aware of the issue with indigenous peoples. With this kind of action film and with an actor like Maja, I can reach them. And I hope they learn something they didn’t know before.”