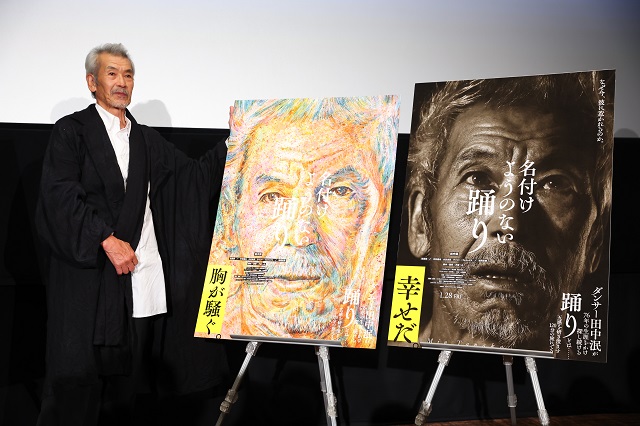 Tanaka Min has been a dancer for 43 years, both in the theater and on the streets, which is where he prefers to perform. In that time, he has perfected a craft that belongs to no single school or style, and is never the same: a dance that is purely his own response to his immediate surroundings at any given moment. Tanaka is the subject of the aptly titled The Unnameable Dance, which had its Japanese Premiere on November 6 in the Nippon Cinema Now section of the 34th Tokyo International Film Festival.

Following the screening, Tanaka and writer-director Inudo Isshin were on hand to field questions about their one-of-a-kind collaborative documentary, which charts an extraordinarily long shooting period, between August 2017 and November 2019, encompassing 90 dances across five countries and 48 locations.

“No matter how long I edited, it never felt finished,” admitted the director. “Showing it today, I’m relieved, because now it finally feels finished.” Added Tanaka, “The director kept filming and filming so I kept dancing and dancing.”

The two first worked together on Inudo’s La Maison de Himiko 15 years ago, when Tanaka was cast as the transgender titular character. When Inudo pitched him the role, Tanaka—fresh off his nomination for a Japan Academy Award for Best Supporting Actor in Yamada Yoji’s Twilight Samurai, which he later won—said he liked the script but told Inudo he couldn’t act. Instead, he told the director he could “just exist in the film.”

Curious to find out the meaning of these words, Inudo accompanied Tanaka on a trip to Portugal to witness the master at work, and the idea of the documentary was hatched.

Tanaka told the full house that he’d never considered dancing “for” film. A disciple of Hijikata Tatsumi, founder of the dance performance art butoh, Tanaka performs strictly based on his reactions to the venue or location. While many recordings of Tanaka’s performances exist, Tanaka said Inudo’s film was different in its ability to not just record, but “reenact” his dance.

To be clear, Tanaka said, this does not mean that the film better “captures” his dance, but rather that it creates something new out of his performances. “Dances aren’t like music, which can be perfectly replayed,” he said. “They’re like fireworks. They are reborn inside of the people who see them.”

Tanaka’s dances are accompanied by the equally audacious animation “performances” of Annecy Award-winning and Academy Award-nominated Yamamura Koji. The idiosyncratic animator’s vignettes in the film both allegorize Tanaka’s inner dance spirit (“my son”) and augment the dancer’s body through a type of special effects that foregrounds the materiality of animation.

Asked why he chose to pair these two artists, Inudo emphasized that they are linked by their strong depictions of “metamorphosis.” Explaining that he feels animation is interesting because of its ability to show metamorphosis, Inudo said, “Similarly, I felt that Tanaka was undergoing a metamorphosis in his dance, transforming as the dance went along.”

Tanaka thought that the shooting process was more like a “derailment” than a metamorphosis. The film’s bold cinematography does its best to capture Tanaka’s art, focusing in on the movements, angles and sinewy textures of his muscular 74-year-old body. “The photographers told me we were going on a journey,” explained Tanaka. “But we also needed to go off the rails.”

The documentary is unique in its near total lack of talking head interviews, a decision Inudo made to focus on the dance and let Tanaka’s own changing feelings around them dictate the structure of the film, which begins and ends with the same dance. This was intentional, as Inudo explained how the two years of watching Tanaka’s dance felt like one long performance.

When not dancing, Tanaka works full time on his farm in Yamanashi, hard labor that’s help him to prepare his body for his art. “It’s not efficient, but in making the film I really came to admire this stance,” said Inudo. “It is a brilliance that only shines with the passage of time.”