OPEN
Return to List of News
2021.11.04 [Event Reports]
Discovering the Best of Both Worlds 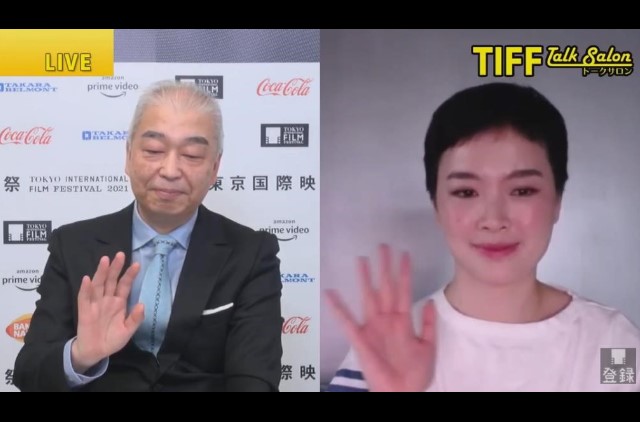 Feng-i Fiona Roan’s semi-autobiographical debut feature, American Girl, is set during the 2003 SARS outbreak in Asia, and in on online Talk Salon session on November 4 with TIFF Senior Programmer Ishizaka Kenji, the Taiwanese American writer-director acknowledged similarities with the COVID pandemic. But she explained, “SARS happened the year I came back to Taiwan, and when the story was first soft-launched in 2018, COVID hadn’t happened yet. I felt SARS gave it a dramatic social background.”

Screening as a world premiere in the Asian Future section of the 34th Tokyo International Film Festival, American Girl follows 13-year-old Fen (Caitlin Fang), who begrudgingly leaves her best friend and her beloved horses behind in LA to return to Taipei with her mother (an excellent Karena Lam), who needs affordable treatment for breast cancer, and her little sister Ann (Audrey Lin). Although she’s glad to see her father (Kaiser Chuang) again, Fen is teased at her strict new Catholic junior high for being “the American Girl,” and her mother’s illness—not to mention the lack of a modern internet connection in the apartment, so she can stay in touch with LA—leads to increasing family friction.

“When you get cancer, everyone gets cancer!” Fen shouts at her mother at one point. “All you learned in America is slamming doors!”, her mom counters. When Ann is hospitalized with a suspected SARS infection and Fen must quarantine at home, things only get worse.

Asked just how autobiographical the film’s story is, Roan told viewers, “About 80-90 percent of the events did happen, but not in that sequence or that timeframe. I compressed them into the three months of the story.”

Ishizaka noted that there are a lot of Taiwanese film fans in Japan, and wondered how executive producer Tom Shu-yu Lin (Winds of September, Zinnia Flower) and Golden Horse winner Karena Lam had gotten involved. The director said, “I knew Tom since my first short, and we caught up again in 2018, when he was the script consultant at [a development event]. He had similar experiences when he moved back from the U.S., and he connected with it on a personal level. He felt that Karena (who starred in Zinnia Flower) would be perfect for the part of the mother.”

Lam grew up in Canada, but her lines in the film are predominantly in Chinese. Not so for the two girls who play her daughters, who are clearly bilingual, as well as convincing as real sisters. “When we were first casting, we knew the actors had to be bilingual,” said Roan. “We started with international schools in Taiwan, which are rare, and we found them at [two different schools]. I rehearsed a lot with them to get them to be comfortable with me, with the camera, and with Karena and Kaiser, who play the parents. They really embraced the kids, and that family feeling really came naturally.”

One viewer asked about the authoritarian-seeming rules at Fen’s school, where she is caned across the hands for a minor infraction in class. Explained the director, “It was a common thing in 2003, but it’s no longer like this in the schools. I got the opportunity to go back to my real school to film, and for me, it wasn’t a negative thing.”

Asked why the film’s family had gone to the U.S. to begin with, Roan said, “Immigration for any family is a very, very big decision. There are multiple factors, but it was a trend at the time. There was an American dream for many, including my parents. They knew that English was important, and they decided to give it a chance.”

Another viewer wondered whether she had found differences in the education she’d received in each country. “For me, the education in Taiwan is heavily influenced by a lot of classical literature,” responded Roan. “That’s where I get a lot of inspiration. I’m very in love with the Chinese language. The education in the U.S. is about being open minded, being open and creative. It taught me to be really flexible and to embrace differences.”

A viewer wondered why the last scene ended the way it did, rather than in a more conventional way. Said Roan, “I have to credit that to producer Clifford Miu, who didn’t like the way we’d shot the conclusion. We’d shot a different ending from what you see now, and he felt we needed something more poetic, something open ended. It was a gift of nature that on that day, a wind blew up just as we finished. One of my crew told me to wait until it died down before I said ‘cut.’ So that’s why we had that footage and were able to end the film in that way.”

“Tokyo’s a very special city to me,” Roan had said at the top of the Talk Salon. “I’m heavily influenced by a lot of Japanese films and it’s a personal joy to have the film premiere in Tokyo.” When she was asked which directors had influenced her work, she enthused, “I love Ozu, especially his dialogue and Mr. Kore-eda is a big influence.” She went on to include several more: “Of course, Edward Yang and Hou Hsiao-Hsien. I love the Dardenne Brothers, especially the way they use handheld camera. And Asghar Farhadi.”

Finally, she was asked what her own family thought of the film. “They haven’t seen it yet,” she said. “I want them to see it with an audience, so they’ll watch at the Golden Horse Film Festival in late November.”