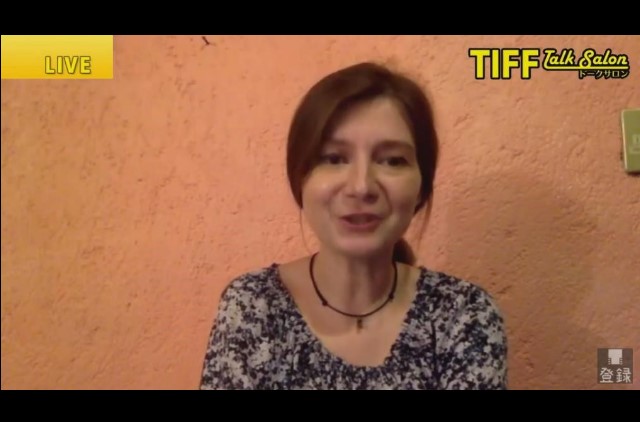 Writer-director Teodora Ana Mihai appeared in an online Talk Salon on November 4 following the Asia premiere of her tense and harrowing suspense drama, La Civil, which is playing in the Competition section of the 34th Tokyo International Film Festival.

The film follows Cielo (Arcelia Ramirez), who is eking out a living running a small jewelry store in northern Mexico when her daughter Laura is abducted by cartel forces. She’s told that in order to get Laura back, she needs to pay them 150,000 pesos and hand over a car that belongs to her estranged husband. Friends tell her not to go to the police, fearful the kidnappers will find out. While she scrapes together most of the kidnappers’ demand, Laura is not returned as promised, and all contact is suddenly cut.

Increasingly desperate, Cielo seeks out the authorities. She turns to the police first, but they give her the cold shoulder, so she resorts to doing reconnaissance work of her own: tracking suspicious vehicles, talking to storekeepers, taking pictures of shady goings-on with her smartphone. She eventually finds a sympathetic ear in a brutal military lieutenant who is eager to use Cielo’s information to ruthlessly stamp out the gangs in the town. As Cielo gets closer to the truth and the whereabouts of her daughter, we bear witness to the terror that the kidnapping crisis has inflicted on an entire community.

Mihai was born in Romania, lives in Belgium, but studied film in the United States. She had fond memories of and friends in Mexico from her time spent as a teenager growing up in San Francisco, but on a trip back several years ago, could no longer recognize the dangerous place it had become. She began doing research to make a film about the country’s deterioration through the “war on drugs.” She explained, “I wanted to know how you can be a parent in this context—how you can go out in the morning and not know if you will be back in the evening,” said Ana Mihai.

In the course of conducting interviews, Mihai was introduced to a Mexican woman who, upon meeting the director, laid a revolver on the table. The woman, Miriam Rodriguez Martinez, had spent several years looking for her abducted daughter. “When I wake up in the morning, I want to kill or die,” she told Mihai. Shocked by the gap between Ramirez’s violent words and her ordinary, middle-aged appearance, the director felt compelled to investigate further.

Mihai originally intended to make a documentary about Miriam’s situation, but filming in her region became too dangerous to continue. “My Mexican crew told me this was not going to end well,” she recalled. Undeterred from telling Miriam’s story, Mihai shifted to making a fiction film and continued corresponding with Miriam for two and a half years. But on Mother’s Day in 2017, Miriam was killed in front of her house.

While the character of Cielo is inspired by Miriam’s tragic story, Mihai says that La Civil is not a biopic, but a metaphor for the many Miriams of Mexico. “It is unfortunately much larger than just her single case. There are so many people looking for loved ones. It’s a deep suffering that the country is experiencing.”

Ramirez gives an exceptionally powerful performance as Cielo, who begins the film as a timid housewife too meek to ask her deadbeat ex-husband for child support, and gradually transforms from panicked mother to hardnosed tracker and interrogator. Mihai was aware of her work since watching her in Like Water for Chocolate (1992), and sent the actress a lengthy script which she read quickly and responded: “Please let me give life to this character.”

La Civil is co-produced by the Dardenne Brothers, and Mihai shares with the great directors a documentary-like focus on the movements and emotions of its characters. She and DP Marius Panduru do not sensationalize the already intense proceedings, choosing to capture the drama by frequently shooting the action from Cielo’s shaky perspective. We are put into Cielo’s gumshoes, trying to get smartphone pics of gang members conducting business through car windows, on street corners and in dimly-lit gang hideouts that could double as torture-porn film sets.

We also see Cielo’s transition from victim to perpetrator, which Mihai said is something she shares with the Dardennes: “I don’t like characters who are black and white. The gray areas are the most interesting.”