OPEN
Return to List of News
2021.11.04 [Event Reports]
Conversation Series at Asia Lounge: Pouring Their Souls into Directing and Acting 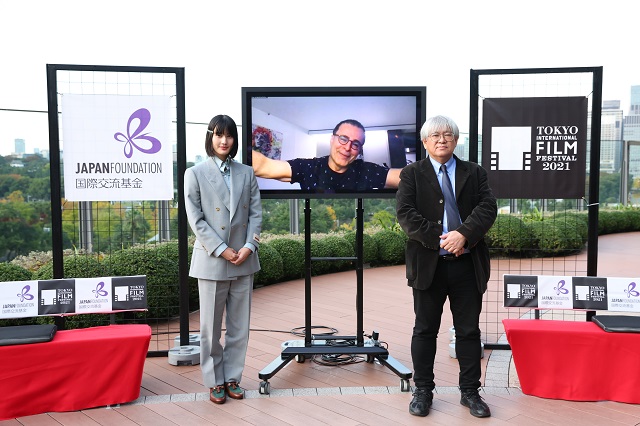 The Kurdish-Iranian filmmaker Bahman Ghobadi and actress Ai Hashimoto, the 34th Tokyo International Film Festival ambassador, were the discussants at the fifth session of the Conversation Series at Asia Lounge, held in the garden at Tokyo Midtown Hibiya on November 4.

Co-presented by the Japan Foundation and TIFF, the series is bringing together acclaimed filmmakers from Asia and beyond to engage in friendly dialogue with their Japanese counterparts each afternoon through November 7, with audiences able to livestream each of the talks.

TIFF Programming Director Ichiyama Shozo noted that Ghobadi’s latest feature, The Four Walls, is being screened in the Competition section of the festival, and that he has been a friend of TIFF ever since his first feature, A Time for Drunken Horses, which was screened here in 2000. Ghobadi had drawn attention with a series of films that addressed the situation of Kurds in Iran, Iraq and Turkey, and won dozens of awards at festivals in the process. He now lives in Istanbul, Turkey, where The Four Walls is set, and it is his first full-length feature since Rhino Season in 2012, his biggest budget movie to date, with an international cast.

Hashimoto admitted at the start of the discussion that she had only seen a few of Ghobadi’s films. However, she professed a strong affinity for his 2004 feature, Turtles Can Fly, a devastating film about Kurdish refugee children biding their time under strenuous conditions on the Iraq-Turkey border during the Iraqi War.

Hashimoto said she was struck by the film’s “emotional power” in depicting “the plight of the Kurdish people,” a situation she knew nothing about. “It really pulled me into the story and I could not stop crying the whole time I watched it.” The experience prompted her to learn more about the region and the relationships between the Kurds and the countries in which they reside as a minority people.

Ghobadi, talking from his base in Turkey, thanked Hashimoto for her interest and qualified her description of Turtles Can Fly with the news that it was “based on reality, but much of the imagery was meant to have a fantastic quality.” When Hashimoto mentioned that usually in such movies it is difficult to differentiate child characters, in Turtles each child was vividly portrayed and she wondered how he found the actors. Ghobadi said that he tended to prefer casting amateurs, whom he could “project myself onto.” In fact, he finds it difficult to direct actors unless he can somehow see himself in their behavior.

As an actor, Hashimoto said that she can identify with such a feeling since she’s most comfortable with directors who “put their souls” into actors directly. “I’m happy to know that you try to do the same thing,” she said.

Ghobadi said that he’d learned this particular technique from watching classic Japanese films, especially those by Mizoguchi Kenji, whom he considered a “poet of tragic cinema,” and thus must have been able to project his own feelings of melancholy onto his actors. Hashimoto confessed that she wasn’t that familiar with a lot of classic Japanese cinema, having been born in 1996, but that she would be sure to study his films more closely.

As Ghobadi explained, film shoots tend to be rushed these days and he longs for the time when directors could take their time and figure out the best way to make a movie. Hashimoto said she often felt that film sets right now were too rushed, and “I would rather take time to make something good.” She also said she had heard that more people of her generation were trying to “slow down their lives,” and she hoped the trend would extend to filmmaking.

A viewer wanted to know if Ghobadi ever thought about making a film in Japan. The director responded that ever since TIFF began showing his films, he has always thought of making a movie here, and that it would probably be about foreign people, possibly Kurds, living in Japan and what their lives are like. As it happens, there is a fairly large Kurdish community in Japan, though it wasn’t clear from Ghobadi’s comment if he knew about it in detail.

Another viewer asked about the writing of Turtles Can Fly, and he related a tale about acquaintances who said he was “crazy” for tackling the topic of Kurdish refugees in Iraq just after Saddam Hussein had been removed from power, since Hussein had effectively declared war on Iraq’s Kurdish minority. “But I thought a film was the best way to address that situation,” he said. “I had been shooting footage of the refugee camps with a handicam, and later I was amazed at what I had captured. It was the children who made the greatest impression on me. The script was easy to write, but the actual production was difficult. By the time I returned to Iraq [from Iran] the bazaars that had been selling weapons were now selling fruit, so we had to create sets and scenes.”

Another viewer asked both Hashimoto and Ghobadi how COVID has affected their work situation. Hashimoto admitted that the “core of filmmaking” hadn’t changed for her, only that she had to wear masks on set when she was not actually in a scene, but Ghobadi talked more broadly about the pandemic’s effect on cinema and life. “I realized that I am nothing without someone to watch my films,” he said. “Directors tend to be arrogant, but then they realize when something like this happens that they can vanish as artists without an audience.” During the down time necessitated by the pandemic, he said he spent more time reading books and seeing a wider range of films so as to “not fall behind.”

“Many people have died during the pandemic,” Ghobadi said. “I extend my appreciation to God every night, but who knows if I will awake in the morning? We have to understand the true value of being alive, and be present in every situation. This morning I woke up and thought about doing this talk all day. It is something I want to cherish, this opportunity. I can see Ms. Hashimoto and Mr. Ichiyama on the screen and the beautiful scenery behind you. That image beckons me, and makes me want to keep doing more.”