OPEN
Return to List of News
2021.11.04 [Event Reports]
An Animated Rock Opera for the Ages 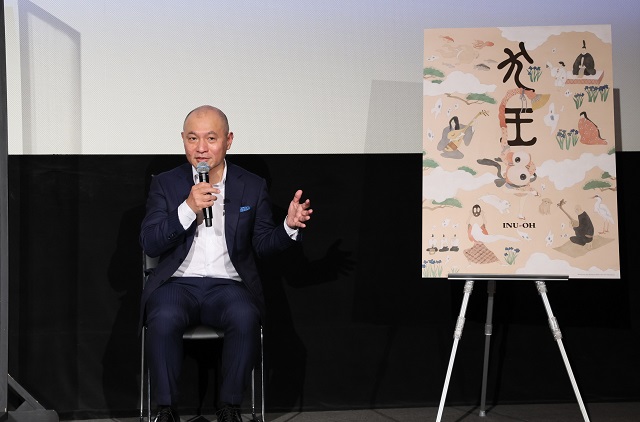 Ancient Japanese history gets a rock-and-roll twist in INU-OH, the latest film from anime auteur Yuasa Masaaki. The film had its Japanese premiere on November 3 in the Tokyo International Film Festival’s Japanese Animation section.

Based on a novel by Furukawa Hideo, the unusual story concerns a pair of outcasts who team up to shake up the nation during the Muromachi period some 600 years ago.

The first outcast is Tomona (subsequently known as Tomoichi and Tomoari, and voiced by Moriyama Mirai), a young man struck blind by a cursed blade. By chance, he stumbles upon players of the biwa, a classic Japanese stringed instrument, who take him in and teach him their ways. The second protagonist is the titular Inu-oh (Avu-chan), a young boy who’s been cursed with a deformed body—but who also has the ability to dance like no one else.

Tomona and Inu-oh meet by chance and become instant pals. They decide to team up to deliver song and dance performances that are a world away from tradition: if anything, they’re more like stadium rock concerts. Before long, their extravagantly theatrical shows and some truly raucous rock numbers (with music provided by legendary musician Otomo Yoshihide) gain them a huge following. But what goes up, must come down…

Following the screening, Yuasa took to the stage in front of the packed house for a “teach-in” session with TIFF Animation Programming Advisor Fujitsu Ryota. It was his first appearance at TIFF since the festival hosted a career-spanning retrospective in 2018.

To start things off, Yuasa lavished praise on the film’s character designer, Matsumoto Taiyo, the manga author whose Ping Pong Yuasa adapted into an anime series back in 2014.

“I love Matsumoto-san’s drawings, so I basically wanted him to work freely, but we did have some discussions about the two main characters,” said Yuasa of the designs. “Inu-oh transforms throughout the film, and we talked about how those changes should occur, because they’re quite important to the story.”

Fujitsu asked what drew Yuasa to the project in the first place. He replied, “Inu-oh was described as being like a rock star of the period, and I thought that was interesting. When we look back at history, we’re limited by the few materials that were left behind. I wanted to expand that scope.”

Yuasa also described how he found himself attracted to the two spirited main characters. “Back in the Muromachi period, performers needed patrons to rise in the world; they weren’t allowed to rise on their own. But these two main characters do, anyway.”

“I also liked the fact that even though Inu-oh is cursed, he has a cheerful personality,” Yuasa continued. “He encouraged me to be cheerful, too.”

Fujitsu noted that INU-OH isn’t Yuasa’s first film to feature characters who like to dance, and asked why the director keeps coming back to it. “Music is a fundamental part of human existence,” said Yuasa. “In ancient times, people would sing, dance and pray to the gods. That’s exciting.”

The director also shared a personal anecdote: when he was younger, he had no qualms about getting on the dance floor and busting a move. But these days, he says, “it’s kind of embarrassing to dance alone, so I hope people dance along to the movie so I can join in.”

Speaking about working with his lead actors, Moriyama Mirai, an acclaimed stage and screen actor, and Avu-chan, a singer, Yuasa said that the most difficult part was that both characters age over the course of the film, so the actors had to pitch their voices to sound like children, teens and adults. He also noted that both actors really dug into their roles, with Moriyama learning to play some biwa and Avu-chan taking the lead on penning the lyrics for Inu-oh’s lavish performances.

Finally, Yuasa shared one of the major themes he wanted to express in the film: one of understanding.

“Even if history doesn’t remember the two leads, they remember and understand each other,” explained Yuasa. “The film may be about the past, but it’s also about now. It’s important that everyone has someone who can understand them.”

Peace, love and understanding through rock and roll in ancient Japan: Yep, it’s a Yuasa Masaaki movie, all right.