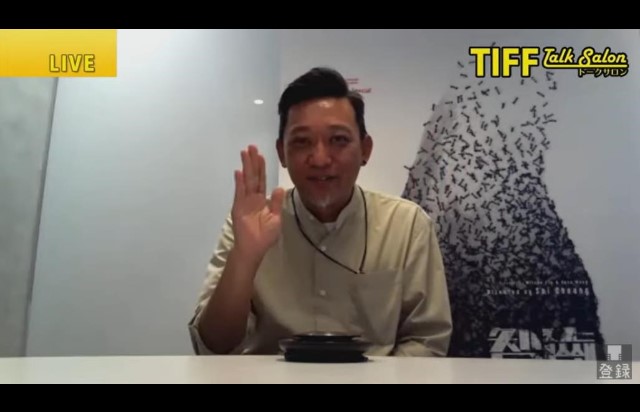 In the early 2000s, Hong Kong writer-director Soi Cheang earned an international following for his ferociously hardcore tales of outcasts surviving impossible ordeals, in work spanning a range of genres, from action movies and thrillers to cop flicks and horror films.

And then, the Monkey King franchise came along and made him a huge box office star.

For a few years, genre fans had to look elsewhere.  But glory be, this year Soi roared back, bolder and badder than ever, with the bleak policier Limbo, screening as a Gala Selection in the 34th Tokyo International Film Festival. An instant urban-noir classic, the dystopian thriller about the hunt for a serial killer in the rain-drenched slums of Hong Kong has traveled widely and earned the director a new generation of followers.

Following the Limbo Japanese premiere on November 3, Soi joined TIFF Programming Director Ichiyama Shozo for an online Talk Salon, first thanking him for his participation in the festival. Responded Soi, “No, it’s I who have to extend my appreciation. To have my film at TIFF and to have it shown on a very big screen is wonderful. And thanks to film festivals like this, I’m able to have discussions online with viewers.”

Ichiyama asked about the process of adapting the novel “The Wisdom Tooth” by Lei Mi. “I acquired the rights to the original novel, which is an internet novel, and it took eight or nine years to complete the film and get it into theaters,” said Soi. “The screenwriting process was three or four years. I was planning to make it in mainland China, but when I realized it wouldn’t be possible, I moved it to Hong Kong and that required rewriting. The production period was about six months long, and we had to do some reshoots.”

Discussing the film’s vividly stark setting, brilliantly shot by Cheng Siu Keung [Johnnie To’s frequent cinematographer], Soi said, “I wasn’t so concerned about the cinematography when we were shooting, since I focused on the story and how it evolves—those were the most important elements. I wanted to focus on how the characters achieved a kind of redemption.”

“We actually shot in color,” he continued, “and during post-production, we edited in color. But in the final stages, I started to think that the story might be better served by making it black and white. We did a test scene and the results were wonderful. It made everything look more chaotic, and it seemed more befitting of the tone.”

The tone of Limbo is nothing if not dystopian. The story follows the increasingly violent hunt for a serial killer by two cops, a grizzled old-timer (Lam Ka Tung) and his new, younger boss (Mason Lee), who is plagued by a toothache. They recruit a young informer (Liu Cya), an ex-con and junkie, and as the trio searches through garbage-strewn streets and potential lairs, unrelenting brutality ensues. Eventually, they discover that the killer is an illegal immigrant with crippling mental health issues.

“The outline of the film and the characters are true to the original,” said Soi, “but since the novel was set in mainland China, we had to create another whole new world when we moved it to Hong Kong. I love the production design, I think Kenneth Mak did a wonderful job. The locations were chosen partially because the area was undergoing great change. Film is also a record of contemporary times, and everything changes so quickly and drastically these days. So I wanted to preserve those places on film.”

A viewer praised the director for the performances of his leads, and asked about working with them. “I think this was probably a big opportunity for Lam Ka Tung,” said Soi. “I’m very fond of him and knew he would do a great job in the role. I thought he was a perfect fit for it. We discussed the character before shooting, and as I was watching him, I felt his performance added extra depth to the character.”

“Mason Lee’s father, Ang Lee, is very famous. But this was the first time I’d seen him act. His role relies a lot on using his eyes to express how he’s feeling, and I found him to be very talented. It’s about how a young person grows, and Mason is quite similar to the character. ”

“In China and Hong Kong, we considered over 200 actors for the role that Ms. Liu plays. But she was the only one I met with. She’d made her film debut in her teens and was waiting for her chance. She said she was already fully prepared for the role, and ready to commit to it, which really impressed me. I think she has immense skill. She’s an explosive actress, and she has a lot of power. You’re so concerned for this character, and you’re led into the story by her. I think both Ms. Liu and Mr. Lam gave 100 percent.”

Asked about the casting of Japanese actor Ikeuchi Hiroyuki, Soi explained, “In the novel, the culprit is not Japanese, he’s an outsider. China is such a large country, but when we moved the setting to HK, I needed to make sure that audiences would understand he’s not Chinese. But he still had to be Asian. Mr. Ikeuchi is quite well known, and I thought he would be a perfect fit. It just so happened that my producer, Wilson Yip, knew Mr. Ikeuchi. I met with him, and he was very happy to take the role. He was excited about shooting in Hong Kong.”

Another viewer asked about the director’s collaboration with Oshii Mamoru’s frequent composer, Kawai Kenji, who did the music for the film. He responded, “I idolize both of them and have been heavily influenced by their work. The music and visuals in Limbo are very influenced by them. Mr. Kawai spent a lot of time writing the music, it took about a year to complete. He brought so much flavor to it, and his blending of the music with the visuals is very much like Oshii’s style.”