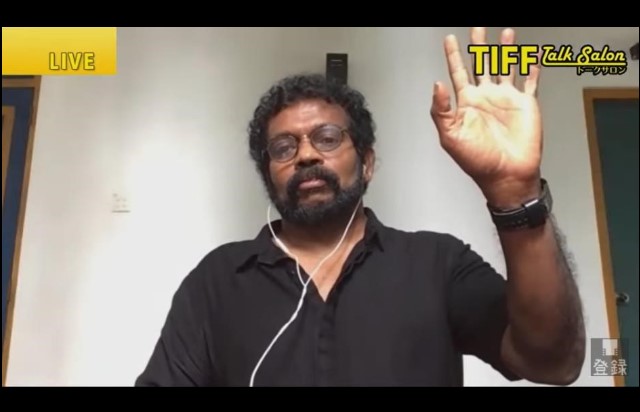 Many people who know of the famous Chilean poet and revolutionary Pablo Neruda may not know that he also had a career as a diplomat, serving in various foreign capitals as an “honorary consul,” a title that sounds more distinguished than what it actually was. In the Sri Lankan film The Dawning of the Day, a world premiere in the Competition section of the 34th Tokyo International Film Festival, Neruda’s stint in Colombo, the capital of Ceylon (now Sri Lanka) from 1929 to 1931 is explored by director Asoka Handagama, who learned about Neruda’s time in his country while reading the poet’s memoir, Luminous Solitude, in which he described in a “casual manner” how he raped the low-caste woman who cleaned his outhouse.

“I didn’t know how to process that information,” said Handagama during the online Talk Salon with TIFF Programming Director Ichiyama Shozo. So he decided to make a film about it, and started writing the script about 20 years ago. “In the meantime, I made four movies,” he said, many of which have been screened at past editions of TIFF, including Flying with One Wing (2002), which won the Best Asian Film Award at TIFF in 2002. “It wasn’t until 2020 that I started actually making the movie about Neruda. It was a long process.”

The Dawning of the Day pulls no punches. Though Neruda is not portrayed as negatively as some of the European expats depicted in the movie, he is shown to be a sensualist and a libertine who doesn’t quite respect local mores. His servant, Ratnaigh (Malcolm Macado), who manages his beachside bungalow, can barely conceal his disgust when Neruda brings women home for sex, or when he drinks and drugs himself into a stupor early in the afternoon. But he knows his place, which is at least above that of the Tamil untouchable caste brought to Ceylon by the British to do most of the work that the Hindus wouldn’t, such as cleaning toilets. Neruda doesn’t care, and often joins them in musical revels while Ratnaigh recoils in disgust, and urges him to bathe after being in physical contact with the Tamils.

Neruda’s moral dissipation is best described by his relationship with Josie (Anne-Solene Hatte), a woman he’d had an affair with during his posting in Burma who follows him to Sri Lanka, despite his protestations. He keeps her locked out of his bungalow while she recites his poetry and threatens to kill any woman who crosses his threshold.

Handagama said he realizes this image of Neruda is one that clashes with the popular one of the sensitive poet, but he felt the story needed to be told now. He admitted that the emergence of the #MeToo movement prodded the production. “Some feminists in Chile protested when the government wanted to name the international airport after Neruda, saying that they shouldn’t honor a rapist. Admittedly, I wanted to take Pablo’s view and approach it objectively, which is why I look at the rape from the victim’s perspective and his perspective simultaneously.”

The title reflects what Handagama sees as the sea change in sensibility that comes from hindsight. “Pablo was very young at the time, and his outlook reflected the times, and I wanted to explore that mentality. Nowadays, he couldn’t get away with abusing a woman in such a way, even though he’s famous. It’s a new way of thinking, and I wanted to emphasize that.”

Given such a premise, it’s difficult to avoid the occasional anachronistic touches, so Handagama tried to follow the memoir closely without thinking about what certain passages meant. When a viewer asked him why Josie brought a large bag of rice all the way from Burma when she stalked Neruda, the director confessed he didn’t know. “He just described it that way. Nobody knows why she brought a bag of rice all that way. After all, there’s plenty of rice in Sri Lanka. I just wanted to be faithful to what he wrote.”

Though it wasn’t difficult to find a Spanish-speaking actor to play Neruda, Handagama had a tougher time finding a Burmese woman to play Josie. “Everyone I contacted in Burma was hesitant to play such a role,” he said. He ended up casting Hatte, a French actress whose mother is Vietnamese. “She was happy to play it and very committed.”

When asked what his next project would be, Handagama admitted, “I’m actually still living with this movie. So until it’s released and shown to people in Sri Lanka, I think I just have to mark my time. It will probably be some time before I start thinking about another film project.”