OPEN
Return to List of News
2021.11.02 [Event Reports]
A Metaphorical Argument for Breaking Down Walls 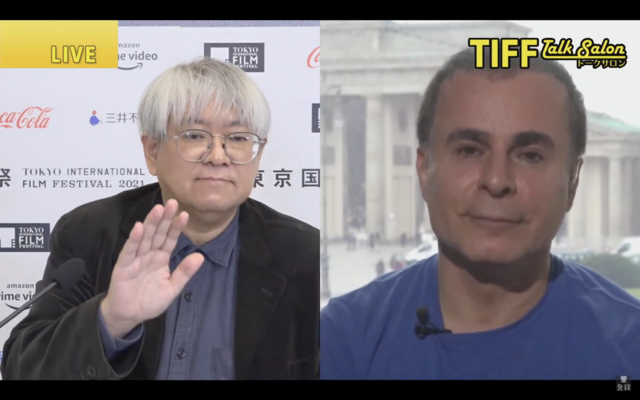 Acclaimed Kurdish director Bahman Ghobadi has found a new muse in Istanbul, if his achingly beautiful, melancholic masterwork The Four Walls is any indication. The director’s current home in exile, years after he was forced to leave his native Iran, Istanbul’s seascape is one of the stars of the film, which just had its world premiere in Competition at the 34th Tokyo International Film Festival.

Joining TIFF Programming Director Ichiyama Shozo for an online Talk Salon Q&A on November 2, Ghobadi told him, “About 10 years ago, I moved to Istanbul, and when I had been away for a short while and returned, the trees in front of my building had been cut down. I asked what was happening and they said that they were going to build an apartment building, which would block my view of the sea. I had just been renting the apartment, and I was so glad I didn’t buy it.”

From such realities, art is created. The Four Walls follows Boran (Amir Aghaee), a Kurdish musician living on his friend Bashuk’s (Fatih Al) boat as they both earn needed cash by shooting the seagulls that prevent flights from safely taking off at Istanbul airport. It’s clearly not a work that Boran relishes, and when he kills a crane by mistake, Bashuk explains why it’s considered an ill omen: “If you kill a crane,” he says, relating one of the film’s many allegorical tales, “its partner cannot bear it, and commits suicide.”

Boran has been toiling for years to save enough to buy an apartment, and he’s just taken out a mortgage on a place that has a lovely, albeit narrow, view of the Bosporus from the balcony. He can’t wait to bring his wife and son, who haven’t yet seen the sea, to Istanbul from a inland city. He paints and prepares the new home with great joy, and celebrates by inviting friends for a music-filled housewarming. But before he can bring his family, a tragedy occurs. When he returns to the apartment many months later, he finds that a brand new tower has blocked his view. Boran is enraged, and thus begins an odyssey in which he earns both the empathy and the antipathy of those he encounters, including a metaphor-loving police chief and two female sharks who are lawyers for the operators of the new building.

Pressed about whether he meant actual physical walls, he responded, “The walls are symbolic. When I was a child, I didn’t know the difference between China, Japan and Korea. Now at my age, I understand why people get mad when they’re asked if they are Chinese when they’re Japanese, for example. There are a lot of walls between people and countries. I wish I had the skills to break those walls down.”

One viewer praised Aghaee’s performance, and wondered if he was Turkish. “Amir Aghaee is from Iran,” confirmed Ghobadi.”I had held auditions and selected a Turkish actor, but after going through two months of rehearsals, he suddenly texted me and said he couldn’t do it, the role was just too much for him to handle. I had only three days until we started principal photography. I had met him before, and Aghaee said he could do it. He could also speak Turkish, so with only two days of rehearsals, we started. But he thoroughly understood the character and the script.”

Ghobadi is credited as the film’s writer, director, producer and composer/music director, and indeed, he’s worn many hats on earlier films too, including festival favorites A Time for Drunken Horses (2000), Turtles Can Fly (2004) and No One Knows About Persian Cats (2009). The music plays a starring role in The Four Walls, with scenes of Boran and fellow musicians (actual musicians in real life) playing a variety of tunes, from hilariously noisy pieces (meant to harass the residents in the new apartment building) to mournful dirges.

“We’re using eight pieces of music, six of which have lyrics in Kurdish,” said Ghobadi. “I wrote those. I also worked with a famous Turkish musician, who wrote one of the other tracks, and the last one was written by an Iranian composer.”

Is the music a reason that Roger Waters, former Pink Floyd mastermind and humanitarian, is one of the film’s producers? The director recalled, “I saw an interview with Roger on the BBC, and he mentioned that he’d seen and felt something for my films. I met him at a concert in Hamburg, and we had dinner and talked. I remember he mentioned that he was trying to free two captive children from ISIS at the time.

“When I [was waiting for funding to come through], Roger asked about my next project, and I told him about this film. Roger said he would help me out. He’s very into films and literature, and has a deep knowledge and interest in Iran and Iraq. And he’s very energetic, like a young man.” (In a piece for the Kurdish Project, Ghobadi wrote, “Love for humanity and opposition to walls—that’s Roger Waters.”

The director was asked about the film’s leavening of the tragedy with brief moments of comedy, and responded, “When I depict Kurdish lives, I feel like I have to depict my own life. I try not to make my films too tragic. I actually have a fear, every single day, that someone might be following me and getting ready to attack me. But I try to put my own story aside and put more humor in my work. Viewers don’t want to see only the hardships. It’s like when we eat, we also need something sweet, especially now with the COVID pandemic.”

“We’re all humans. We shouldn’t build walls; we should destroy them. Through culture and music, I hope we can break the walls down.”

Ghobadi has been a frequent guest at TOKYO FILMeX and other events in Japan, and he had a final message for his fans here: “I love the Japanese, and I’m always thinking of you from far away. I hope Japan will continue to be peaceful, and that love—the No. 1 religion in the world—will embrace you.”