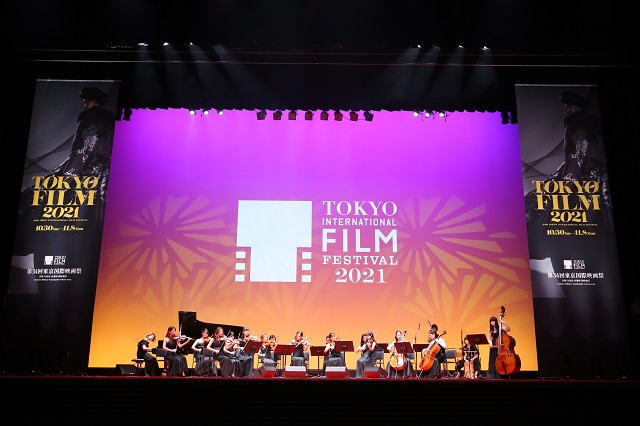 The 34th Tokyo International Film Festival kicked off its 10-day run tonight with a Red Carpet event on the grand staircase of the International Forum in Hibiya prior to the Opening Ceremony. Although international travel restrictions prevented a large foreign presence for the second year, acclaimed French actress Isabelle Huppert, who is serving as the 34th TIFF Jury President, and industry stalwarts from Europe and Asia joined the many Japan-based filmmakers and stars who walked the carpet.

Due to the pandemic, strict safety measures were in place at the forum. These will remain for all physical screenings, Q&A sessions, master classes and the Conversation Series at Asia Lounge, which will all be held in TIFF’s new venues in the Yurakucho-Hibiya-Ginza area of Tokyo. Some Q&A sessions will be taking place online to accommodate filmmakers who are overseas, and other events will be livestreamed. The festival will be screening 126 films physically, including outdoor screenings. Fifteen titles are competing for the Tokyo Grand Prix in the International Competition, 10 of them world premieres, drawn from 1,533 submissions from 113 countries and regions.

The Red Carpet festivities got under way with MINAMI Kaho, Shogen and KANEKO Takuhei, stars of award-winning Philippine director and TIFF regular Brillante Ma Mendoza’s GENSAN PUNCH. A Gala Selection marking the Japan premiere of the film, it was inspired by the true story of a disabled Japanese athlete, played by Shogen, who goes to the Philippines to pursue a career as a boxer.

The actor commented, “Because of COVID-19, we had to stop shooting the film midway through, and it took us 15 months to finish. I’m so happy to be standing here today with my costars.” Recalled Minami, “I was on the TIFF jury in 2018, and had the chance to meet Mr. Mendoza, who was the jury president at the time, and to get to know him. So I feel that it’s through this festival that I was connected to this opportunity.” Kaneko, who also stars in Mendoza’s Payback, which is having its world premiere in the 34th TIFF Competition section, noted that, “Neither of the films had completed scripts when production started, but the director knew exactly what he wanted. It’s an honor to have both of them at TIFF.”

The directors and casts of the two Japanese films in the Competition lineup also appeared. NOHARA Tadashi (cowriter of Happy Hour and Wife of a Spy), making his feature directing debut with the Competition title Third Time Lucky, was accompanied by two of his stars, KAWAMURA Rira and KOBAYASHI Katsuyuki. “I was very surprised to be selected, but also very happy,” Nohara said. “The festival has such an illustrious history, and so many famous films have played here.”

MATSUI Daigo, who was last in TIFF Competition with Japanese Girls Never Die (2016), brought along the stars of his new film Just Remembering, IKEMATSU Sosuke and ITO Sairi. The director commented, “TIFF taught me that my films could travel overseas and reach international audiences, so I’m very happy to be here again.” Said Ito, “In a positive sense, I could forget about COVID-19 during the shooting of this film, and as the story spans six years, reflecting how our lives and relationships have changed, I think it’s a thought-provoking film.”

Also on the carpet was the Nippon Cinema Now Director in Focus, YOSHIDA Keisuke, who is being honored with screenings of three recent films, Himeanole, Blue and Intolerance, in the newly revamped section. He commented, “The response to my selection has been interesting. My neighbors, an older man and woman, told me ‘Wow, you were selected for TIFF! You’re doing great!’” 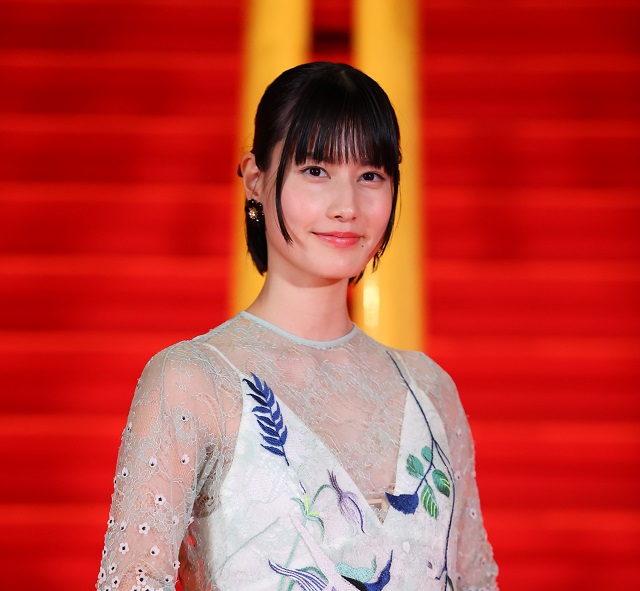 Finally, after the appearance of her fellow jurors, AOYAMA Shinji, Chris Fujiwara and SEBU Hiroko, TIFF Jury President Isabelle Huppert arrived on the carpet with Lorna Tee, who is also on the jury. Huppert said, “I’m so honored and happy to be here. I always expect a wonderful experience whenever I attend a film festival, and I look forward to such an experience here.”

The Opening Ceremony began with a live performance by the Women Orchestra Japan, playing a compendium of familiar songs from beloved films. 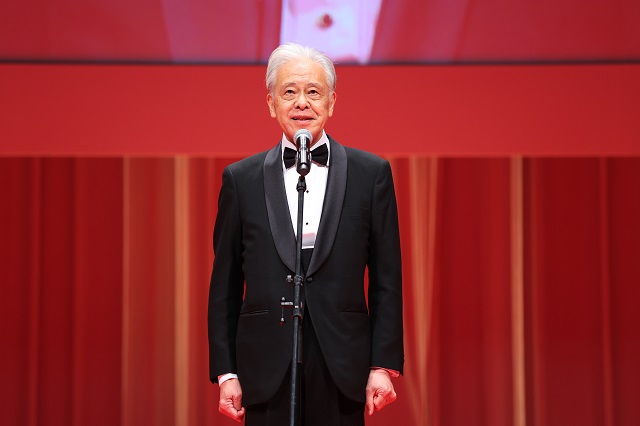 TIFF Festival Chairman ANDO Hiroyasu then welcomed the audience from the stage, noting that organizers had been “on the edge of our seats until the very last minute, wondering if we would be able to hold the film festival this year. But today, the pandemic has subsided, and we are thrilled to be able to welcome so many people to the opening.” He expressed gratitude for the support TIFF received in moving its main venue for the first time in 17 years, from Roppongi to the Hibiya-Yurakucho-Ginza area, and explained, “We wanted to cultivate a greater audience for film, and as I was strolling around tonight, I saw the TIFF banners fluttering and felt such excitement. Also for the first time in 17 years, we have a new Programming Director, ICHIYAMA Shozo, and he has made great efforts reorganizing the various sections and clarifying the selection policies for each. In the New Testament, there is a parable, ‘New wine must be served in new wineskin.’ I hope that this festival, with its new venue and new films, will be a place of enlightenment and empathy for all film lovers, regardless of national borders, for the next ten days.” He then declared the festival officially open.

Japanese Prime Minister KISHIDA Fumio next appeared via video, commenting, “I would like to express my heartfelt congratulations on the 34th Tokyo International Film Festival being held today. Amid the ongoing battle against the pandemic, I would like to express my gratitude to all of you for your ingenuity and dedication in organizing this new type of film festival, a hybrid of the real and online. The Tokyo International Film Festival is a very important opportunity to let people all over the world know about the appeal of our culture and excellent content. I hope that through this festival, the appeal of Japanese films and animation will reach as many people as possible. In closing, I would like to offer my best wishes for the success of the Tokyo International Film Festival and the further development of the Japanese film industry.”

Actress HASHIMOTO Ai, 34th TIFF Festival Ambassador, then took to the stage and was asked about the festival’s theme this year, “crossing borders.” She said, “There are different types of borders — physical, national, cultural, gender — but I think we need to draw closer to one another and accept one another. I think the spirit of tolerance is nurtured through film, and festivals like this will help communicate that message.”

There followed an overview of this year’s TIFF sections and the festival’s commitment to actively addressing SDGs such as gender parity and climate action, as well as its focus on transcending borders.

The members of the International Competition Jury then appeared on stage: Director/Screenwriter AOYAMA Shinji, Film Critic/Programmer Chris FUJIWARA, Film Score Composer SEBU Hiroko and Producer/Curator Lorna TEE, who commented, “It’s more important every day that cinema remain independent and be given the freedom to tell the stories that need to be told.”

Jury President Isabelle Huppert then addressed the audience. “I’m so happy to be here. To create a great festival is always a challenge, but especially after this past year, this year is really a victory. What we missed most is to be together and to watch movies together. I’m really looking forward to discovering this selection of films with my fellow jurors. We need cinema and cinema needs us.”

The ceremony then turned to the night’s biggest draw: the 34th TIFF’s Opening Film, Cry Macho. Marking the 50th anniversary of his career as a director, which began with Play Misty for Me in 1971 and includes the Japanese-language Letters from Iwo Jima in 2006, Clint Eastwood has returned with Cry Macho, in which the 91-year-old legend also stars. TIFF screened a brief video tribute to the director, in which the film’s producers and such celebrities as Steven Spielberg, Mel Gibson and Hilary Swank, discuss his ongoing legacy.

Finally, a letter from the Eastwood himself appeared onscreen. “Hello Japan,” it began. “I’m very honored to know that my latest film, Cry Macho, has been selected as the Opening Film for the 34th Tokyo International Film Festival. I wish I could have been there in person to attend the festival. Through this film, I would like to deliver my interpretation of ‘true strength.’ Cry Macho was shot during the pandemic, and I hope it can be one of the films to bring courage and strength to the film industry. Please enjoy the film.” 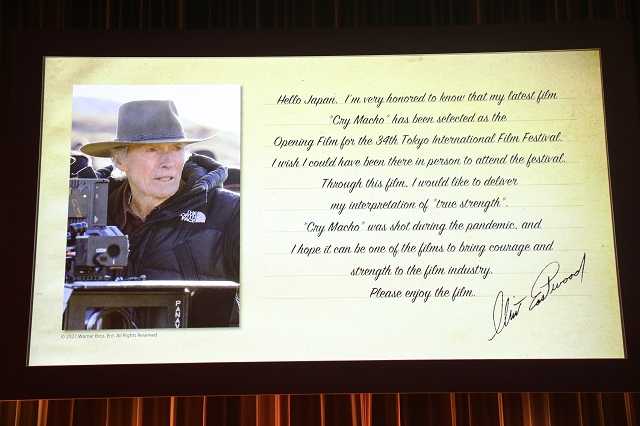 And with that, the 34th TIFF Opening Ceremony came to a close, the lights went down, and the audience settled in for the Japan Premiere of Cry Macho.

The 34th Tokyo International Film Festival will be showcasing films from around the world in the Hibiya-Yurakucho-Ginza area from October 30 – November 8.