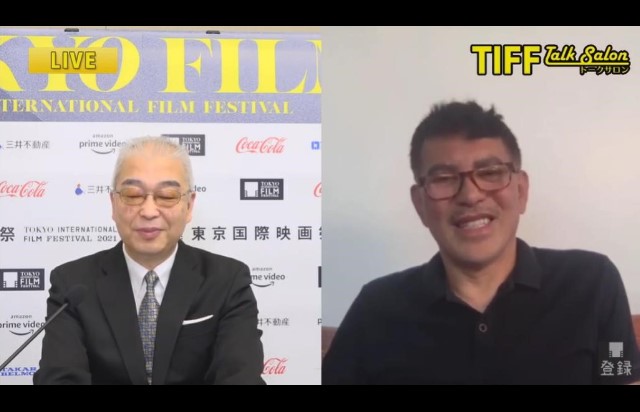 
Brillante Ma Mendoza is no stranger to depicting social injustice in the Philippines’ underground, having already made such internationally recognized titles as Kinatay (2009) and Ma’ Rosa (2016). His latest effort, Payback, is a welcome addition to such masterworks, which highlight the struggles of the have-nots who are forced to continue the cycle of life they have been born into.

Payback made its world premiere in the Competition section at the 34th Tokyo International Film Festival on October 30, Mendoza’s birthday. The auteur, who is in the Philippines in pre-production on his next film, appeared for an online talk salon the following day to respond to the audience’s questions in a virtual form.

“These are based on real-life situations and real-life stories,” said the director about the film, the story of young Isaac, who has to steal motorcycles to pay off the father’s debts. What characterizes the film is a realistic depiction of Filipino youth and their surroundings, with the use of rapid editing and handheld cameras that are constantly on the move. Mendoza calls his own signature style docudrama: “Reality here doesn’t only stay on the story itself, but on how to recreate realities. In film, for instance, actors, execution, cinematography and even the editing itself [are used]. It’s a combination of all creative aspects of filmmaking.”

Supported by Mendoza realism, the truthful depiction of motorbike thieves and their milieu sheds light on poverty-stricken youth. According to the filmmaker, “It’s not only about politics. What I wanted to focus on is different issues that need to be addressed. As a filmmaker and storyteller, we can always interpret these issues in our work without it being seen as propaganda against the government or for the government. When you make films about certain issues, you don’t necessarily want to put down the institutions that are represented. The intent here is not to criticize them but to call attention to them. Proper attention should be given to these situations.”

As a means to express the inner psyche of Filipino youth, the film relies on popular culture, especially rap music and rap battles. “We cannot deny the fact that rap battles are very popular among them,” said Mendoza. “Even in the Philippines, you have this huge following for this kind of rap. There are always events, especially before the pandemic. In the rap battle, you can actually express whatever feelings they feel. It’s one way of expressing how the characters feel in the film.”

Mendoza has always been prolific, directing and producing new works at an amazing pace. This year at TIFF, another film he directed, GENSAN PUNCH, co-produced by the Philippines and Japan, had its Japanese premiere as part of Gala Selection; while The Brokers, produced by Mendoza and directed by his disciple Daniel R. Palacio, made the cut in TIFF’s Asian Future section.

It was only natural for one audience member, therefore, to ask what factors are necessary for the director to decide which film projects should actually go into production. “Of course, it should come from my instinct, from my philosophy, and from myself,” he responded. “Why I should be doing this film. Not only the films I’m directing for myself, but the films that I’m going to support or the films that I’m going to produce.” In terms of his continuous collaboration with Palacio, he noted, “We’re on the same path in terms of why we make films.”

Mendoza’s resilient and creative spirit has not been affected much by the ongoing pandemic. “The COVID situation shouldn’t stop us from doing something creative,” he said. “This is the situation that we have right now, but we’ve been through other similar situations in the past. Even harder situations. But it shouldn’t hinder us from creating and doing something worthy, especially if what we’re doing is something that we really love doing.”