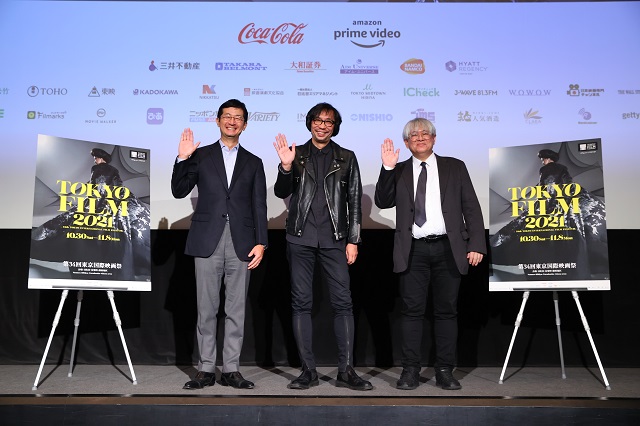 The 34th Tokyo International Film Festival (TIFF) got underway on the morning of October 30 with a session devoted to one of the festival’s main goals: contributing to a robust future for film.

With leading streaming service Amazon Prime Video, which supports TIFF’s goal of discovering and nurturing new talent, a new short film competition had been launched at the end of June, the Amazon Prime Video Take One Awards. The two-month submission period yielded 223 entries, under 15 minutes each, from filmmakers living in Japan who had not yet made a commercial feature as director, writer or producer.

Nine finalists were then selected by a jury led by acclaimed director YUKISADA Isao (Go, Crying Out Love, in the Center of the World and Theatre: A Love Story), and on TIFF’s Opening day, he joined KODAMA Takashi, Japan Country Director, Prime Video, to chat about the award before the TIFF screening of the nine finalists. The session was moderated by TIFF Programming Director Shozo Ichiyama.

“I was very pleased to be invited to head the jury for this wonderful new award,” Yukisada told the packed audience in opening remarks. “The films seem completely unique, as if they were chosen to provoke a lot of intense discussions about them  among the jury… When I watch them, maybe I’ll feel like some of the filmmakers are already my rivals.”

After expressing his pleasure about the new initiative, Kodama said, “Amazon Prime Video has been in Japan for more than six years, but we still lack original content. Globally, our goal is to become the Home for Talent, so that filmmakers choose us as their preferred online distributor. Our target isn’t just established filmmakers like Mr. Yukisada, but also new talent. We’re hoping to nurture new directors of both films and drama series, and to provide an opportunity for them to flourish.”

Yukisada discussed his own experience working with Prime Video. “Last year, COVID-19 forced the closure of theaters in Japan just after the release of Theatre: A Love Story,” he recalled, “And Prime Video suggested that I distribute online. I was initially opposed, because I personally believe that films should be shown in theaters. But when the film was able to be shown in limited theaters and on Prime Video at the same time, it reached millions of viewers from over 240 countries around the world. Then I realized that filmmakers really need to consider online distribution as an option.”

Kodama stressed the importance of reaching international audiences via Prime Video, which can also open up “exciting opportunities to create new fans for Japan-based filmmakers, after they’ve already built a following in the domestic market. I believe a new era is coming for feature film directors, not just for Japanese animation creators.”

Noting that film festivals are also important places to discover and promote the latest work of upcoming directors, Yukisada said, “Festivals are especially essential because they can shine the spotlight on unknown filmmakers and great films, as well as on new directors with promising careers. I feel that there are some talented directors like that in this selection.”

The Amazon Prime Video Take One Award finalists (in order of directors’ name) are: The Water Sprite by Kaneko Masakazu; Sunday & Calm Sea by Kim Yunsoo; Kiss Me Through the Window by Kodaka Sari; Birdland by Kogahara Takeshi; NAGISA by Kogahara Takeshi; EVEN by Miyahara Takuya; Night Train by Oda Kaori; Under the Bridge by Sangoumi Midori; and Necessary and Unnecessary by Setsuda Tomoichiro.

The winner will be announced at the TIFF Closing Ceremony on November 8, and will receive a prize of 1 million yen from Amazon Prime Video, as well as the opportunity to explore the production of a feature film with Amazon Studios and to seek the development of a script.