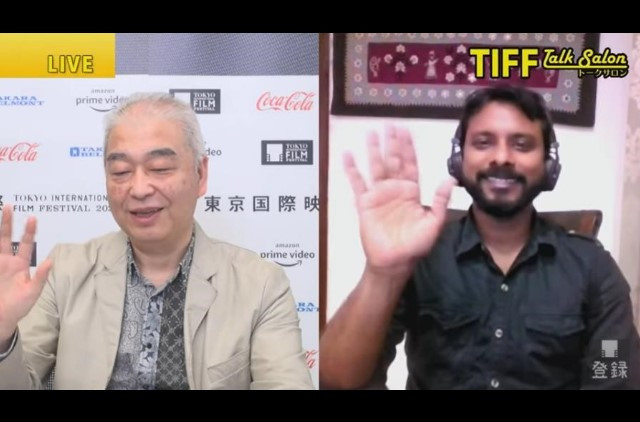 Writer-director Ritesh Sharma appeared in an online Talk Salon on November 7 to discuss the World Premiere of his raw social drama, The Brittle Thread, playing in the Asian Future section of the 34th Tokyo International Film Festival.

Both Rani and Shadab represent different sketches of the working poor. Rani is hot-tempered and striving, using her body to get within the orbit of powerful men and tell them what she wants. The director explained that he created her character out of a desire to show the humanity of dancers who men often dump beer and jump on during their performances. “It’s a dance where there’s no respect for women, and it’s happening in the temple,” he commented.

Shadab is shy and reserved, and would rather walk away from a fight with a relative or street toughs than stand up for himself, or confess his love to his shop’s mannequin rather than his new Israeli friend. But he embodies a craft that is too often unnoticed in Indian society. “Most films just show the Ganges and the temples, but the weaver is everywhere in Varanasi and the saree is very famous,” said Sharma.

The director was born and raised in the city, which cinephiles will know from Satyajit Ray’s Aparajito (1956), and still has family there. He portrays the vibrant street life, capturing documentary footage of throngs of worshippers crowding the riverbanks to participate in holy pilgrimages, as well as its rich cultural heritage and its history of dancers and weavers.

The multicultural city is home to a majority Hindu population, but also houses a sizable Muslim contingent in addition to followers of several other faiths. As such, the director also does not shy away from its history of religious strife and the violent riots that have ground life to a standstill. “India was never a Hindu country. It’s a country where all religions are welcome,” explained Sharma. “Creating this hate is not acceptable for me.”

When asked why he chose to have Shadab meet an Israeli tourist, Sharma noted that there are many young Israeli backpackers in India, but that there was indeed a significance to her being Israeli. “We know what’s going on in Israel,” explained the director. “I wanted someone who could understand, who could feel the same kind of emotion when she sees the same hatred and politics in India.”

Sharma weaves what is ultimately a love story about different genders, ethnicities, religions, occupations and politics into a cinematic tapestry symbolized most concretely by the handloomed saree, which requires 15 days and multiple types of thread to complete. “All of society is comprised of different colors,” said the director. “The saree depicts all of society and the love that is exchanged between people.”

Despite the less-than-rosy conditions shown in his film, Sharma said he is somewhat more optimistic about India’s future and its ability to overcome religious differences: “I think it’s very easy to live together. You just have to love each other.”