OPEN
Return to List of News
2021.11.08 [Event Reports]
A Young Immigrant Punches Above Her Weight 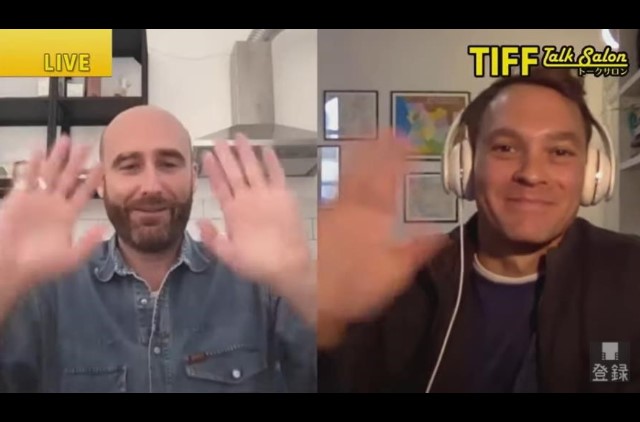 The Italian film Californie, an Asian Premiere in the Competition section of the 34th Tokyo International Film Festival, charts the life of a Moroccan immigrant from the ages of 9 to 14. Jamila (Khadija Jaafari) is a headstrong girl whom we first see learning how to box at a gym in Pompei, where she lives with her family. Her desire to acquire pugilistic skills seems to be a reaction to the bullying she receives at school, but Jamila isn’t much of a social animal. Whereas most cinematic tales of adolescence focus on a young person’s wish to fit in with her peers, Jamila spends much of the film asserting her independence. By the age of 13, she has already dropped out of school and is working full time as an assistant hairdresser at the titular beauty salon.

According to the writer-directors, Alessandro Cassigoli and Casey Kauffman, who spoke to TIFF Programming Director Ichiyama Shozo about their movie during an online Talk Salon session on November 7, the whole idea of making Californie started when they met 9-year-old Khadija Jaafari on the set of a previous film. She had gone to the set by chance, and “She just entered the frame and started talking to the protagonist,” recalled Cassigoli. “We were immediately impressed with her whole attitude and during the editing of that movie we asked around—this was in Naples—and found her and tried to write something based on her life.”

Consequently, Californie took its shape as it progressed, since it wasn’t going to be a conventional documentary about Jaafari’s life, but rather a narrative feature that incorporated her living situation with fictional elements plucked from her surroundings. “It wasn’t the type of film where you complete a screenplay first,” said Kauffman. “The process was to do as much research as possible into her real life and her family, as well as other young people in Pompei. Then we would write a script and rehearse, film and edit, and then evaluate what we had and decide what worked and what didn’t. After six months we would start the whole process over again.” Since the movie covers some five years, they started over many times.

Sometimes the directors would incorporate things that happened to Jaafari’s real-life older sister in Jamila’s story, just to offer a broader take on the kinds of lives these immigrant families lead in Italy. “The important thing,” said Kauffman, “was that it had to make sense to Khadija. We could never tell her what to be, except in the realm of obvious things. It was more like observing her life and then trying to interpret it all into something that was interesting on film. We were constantly rewriting.”

Such a methodology had its risks, of course, especially when it centered on an adolescent girl whose strong point was her refusal to submit casually to authority. In the film itself, Jamila is constantly challenging her mother, her sister, her friends, even her employer, a woman who mostly comes across as a sympathetic parent figure until the viewer realizes that she’s essentially exploiting a minor. “I have to say that our producer was very nervous,” said Cassigoli. “There was always the notion that Jaafari would get discouraged and just disappear. Sometimes she’d be in a bad mood and we’d get anxious, but in the end we established a good working relationship and she seemed happy to go through this experience.” And contrary to what Jamila goes through in the film, Jaafari stayed in school, which the two filmmakers encouraged.

One viewer was curious about the title, a misspelling of the name of the American state, which is meant to suggest the dream of another life, especially to someone like Jamila, who still isn’t sure what she wants except to be free. In the film, the misspelling happens when the beauty salon owner orders a new signboard made. She can’t afford to have a corrected one made and so leaves it as it is. “We fell in love with this idea, which is common in southern Italy, that things are never perfect,” said Cassigoli. “But you still cope with it and adjust. And we liked the idea of there being a completely different place, a dream place, because Jamila is always dreaming of somewhere else.”

These dreams are almost tangible in the movie, and another viewer wanted to know what happens to Jamila in the end, and what Jaafari is doing now. “At one point we learned that Khadija’s sister was leaving home to take a job in a different city as a private caregiver,” said Kauffman. “In Italy such jobs are very important, but they are paid very little and tend to be exploitive. We were shocked when we heard that and didn’t think it was a good idea, but both the sister and Khadija thought it was a great opportunity to not only make more money but have an adventure, so we changed our perspective and wrote this into the script. In the movie, Khadija is the one who takes the job. We decided to be neutral about it and not judge that decision.”

Cassigoli told viewers that Jaafari has finished what he called “third grade” in public school and is now enrolled in an arts school. “And she continues to box,” he said. “She even won a championship in her age group, and after the movie was shown in Venice, she’s gotten a lot of offers from casting directors.”