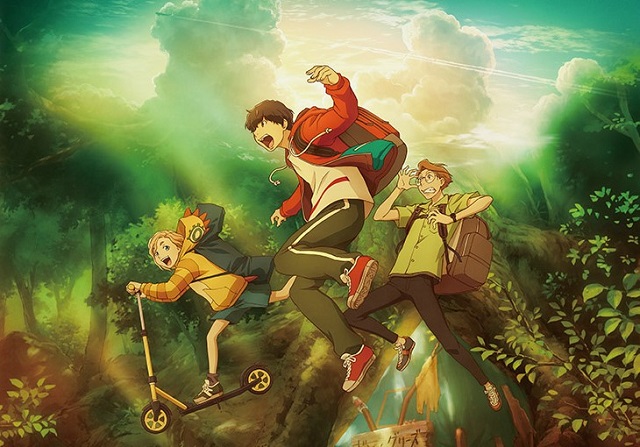 In the thematic follow-up to her critically acclaimed television anime series “A Place Further than the Universe,” about four female high school students who take a summer trip to Antarctica, writer-director Ishizuka Atsuko decided to aim for another icy destination: the Arctic.

Such is the hook for Ishizuka’s first original anime feature film, Goodbye, DonGlees, a magical coming-of-age story about three male high school students who set out on an adventure that ends up in Iceland. The film had its world premiere on November 5 in the Japanese Animation section of the 34th Tokyo International Film Festival, and the creator greeted the audience along with celebrity voice actors Hanae Natsuki (Demon Slayer), Kaji Yuki (Attack on Titan) Murase Ayumu (Haikyû!!) and Hanazawa Kana (Psycho-Pass).

In Ishizuka’s new film, Roma (Hanae) and Toto (Kaji) are the DonGlees, a team name for the two eccentrics who can’t fit into their rural hometown outside of Tokyo. Toto moves to Tokyo with the aim of becoming a doctor, leaving Roma alone without a sense of direction. Back home during summer vacation, Toto finds that a third member, Drop (Murase), has joined the DonGlees. When accused by their classmates of starting a forest fire, the three friends set out to the mountains to find the recorded footage of a crashed drone that will prove their innocence.

Like Ishizuka’s previous series, the journey is more important than the destination. Roma, Toto and Drop bond over impromptu karaoke, several near-death experiences, and deep conversations confessing their fears and vulnerabilities. This drama occurs amidst the exquisite natural riches of their backwoods, providing a stark and picturesque contrast to the inner conflicts among the main characters.

While the setup in DonGlees is similar to Universe, Ishizuka said that she was aiming for a different kind of relationship in the switch from an all-female to all-male cast. “In A Place Further Than the Universe, the characters’ journey to Antarctica is really a method to explore deep within their own hearts,” explained Ishizuka. “With DonGlees, I wanted to create characters who project their energy to the outside world, and I ended up with these three boys.”

This energy is reflected in many comical and frenetic sequences where the three quarrel, goof around, and generally throw their bodies everywhere on screen. Hanazawa, who starred in Universe and has a small role in DonGlees as a love interest for Roma, said this was a big difference between the works: “The characters are of similar age, but we were a little more mature in Universe. Here, the audience can enjoy the crazy antics of the boys.”

Unlike some series or films where actors voice their parts separately due to scheduling conflicts, the three male leads recorded their scenes together. “There were so many scenes where our lines overlapped with one another. It was difficult to sync our breathing, but we were able to find a good rhythm” said Hanae. He had found stardom giving voice to another adolescent boy (Tanjiro) in Demon Slayer, and noted that he voiced Roma with a certain tempo that reflected how “kids that age just chatter reflexively without much thought to what they’re saying.”

Kaji likened the comedic dance between the three to the boke and tsukkomi routine of manzai comedy, where Toto’s tsukkomi (straight man) responds frantically to the timing of the boke (fool) of Roma and Drop. “I lost my voice several times,” he sighed.

Ishizuka praised all three actors, explaining that she chose them because of how “natural” they were with such fluctuations in mood. “They have to be very talented because these drastic shifts can be jarring if the voice actors aren’t as experienced,” she said.

Animation studio Madhouse assembled not just experienced and skilled voice actors, but some of the best artists, animators and designers in the industry for the film, including veteran character designer Yoshimatsu Takahiro. Animation typically aims to portray characters “on model,” that is, without significant deformation. But Ishizuka instructed Yoshimatsu to go “off model” and provide many “funny faces,” helping to create the film’s sense of visual comedy.

Of course, DonGlees is still a coming-of-age drama, and ultimately a tragic one. As Hanazawa cautioned the audience, “Make sure you have a handkerchief ready.”