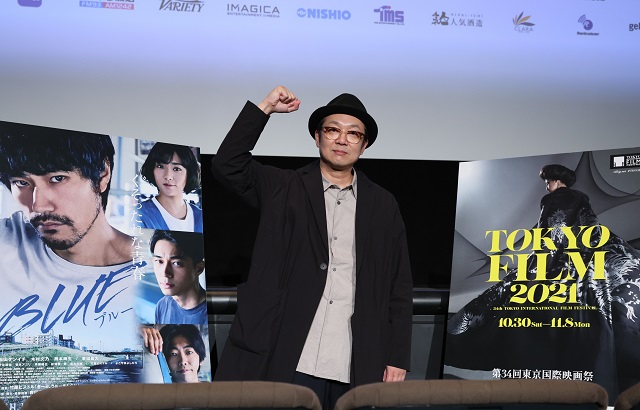 In the Japanese boxing ring, the blue corner is assigned to the challenger, or lower-ranked boxer. Yoshida Keisuke’s captivating feature Blue focuses on the boxers in this corner, and the question of why they keep fighting when wins elude them. The deeply absorbing masterwork is one of three being highlighted at the 34th Tokyo International Film Festival, which is honoring the director in the Nippon Cinema Now section as “The Master of Psychological Drama.”

Yoshida’s disquieting depictions of human nature have been apparent since he began his career, but the festival is now shining the spotlight on him in the hopes that his work will be more widely seen overseas. Following a screening of Blue on November 5, the writer-director joined TIFF Programming Director Ichiyama Shozo for a Q&A session.

Being a long-time boxer himself, the filmmaker said he had been eager to direct a boxing film based on his experiences. “I’ve been boxing since I was 14 years old and I’m still doing it now,” said the director. “When filmmakers write scripts, it’s often the case that it’s based on their personal life. Since I’ve been boxing for 30 years, it was natural for me to make a film about it.”

Despite the genre convention that usually focuses on the winning side, Blue is a unique film that doesn’t make winning a match the priority. Yoshida’s particular attachment to the underdog comes from the fact that the protagonist is based on an actual person. According to Yoshida, “Urita (mesmerizingly played by Matsuyama Kenichi) is based on a particular boxer who was a trainer by day and boxer by night. One day he disappeared from the gym after a match. One reason I made this film is that I simply wanted him to watch it. The ending is almost a love letter to him. I believe his flame still hasn’t died.”

Blue can thus be seen as a paean for anyone who has given up on their dreams. “This is a boxing film, but the theme can be applied to any situation,” said the director. “Most of the people in the world, in the end, give up on what they’ve been trying hard to achieve. You might wonder, if so much time is wasted, maybe things should have turned out differently. There may be regrets. Having said that, all these efforts that you’ve made, all the time you’ve devoted to it, are beautiful.”

The film was obviously a passion project for the director, but it was also so for the lead actor. “We made an offer [to Matsuyama] two years before shooting. We weren’t sure if we could get enough money to make the film, but I wanted to see if Matsuyama was interested,” remembered Yoshida. “The problem was that he had already joined a gym and started training. We couldn’t back down after that and kept feeling pressured as we couldn’t start shooting for 18 months after first talking to him.”

Yoshida has spent his entire career making films from his own original scripts, including such works as Blue and his latest feature Intolerance, also being screened at TIFF. Asked about where his originality comes from, the director shared his secret: “Whenever I go out to drink and talk to people, I really notice the way people speak and the things that annoy me. When I’m on the train back home, I take notes on those behaviors and the people who bothered me. They tend to appear in my films and some of them, especially those who are from my home prefecture, keep reappearing.”