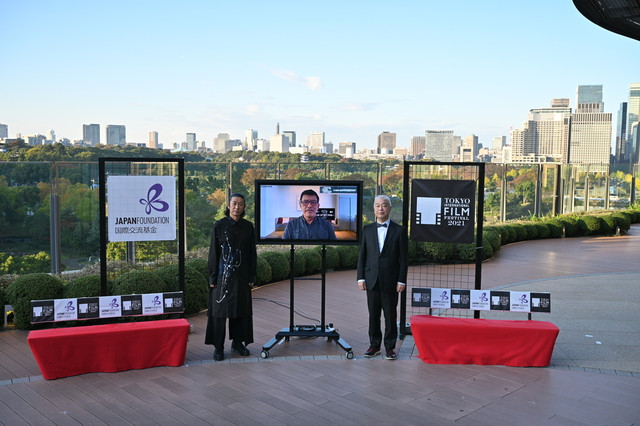 Co-presented by the Japan Foundation and TIFF, the series is bringing together acclaimed filmmakers from Asia and beyond to engage in friendly dialogue with their Japanese counterparts each afternoon through November 7, with audiences able to livestream each of the talks.

Ishizaka Kenji, TIFF senior programmer, introduced the session, with Nagase joining him in person “in the heart of Tokyo” and Mendoza joining virtually.

“TIFF has a long history with Mr. Mendoza,” said Ishizaka. He was given a retrospective, “The World of Brillante Ma Mendoza,” in 2015.  He was invited to contribute a short film to the 2016 Asian Three-Fold Mirror omnibus, co-produced by TIFF and the Japan Foundation Asia Center; and he served as the 31st TIFF Competition Jury President in 2018. This year, TIFF is presenting the world premiere of Mendoza’s new film Payback in the Competition section, as well as Japan premiere of the Philippines-Japan co-production GENSAN PUNCH, screening in the Gala Selection. 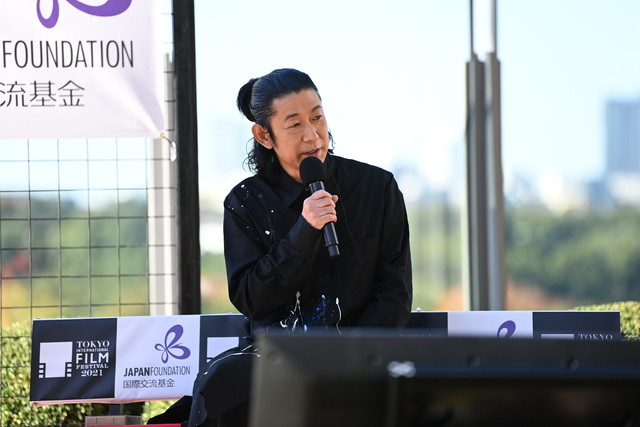 Searching for commonalities, Ishizaka also mentioned that Nagase had starred in one of the other short films in the Asian Three-Fold Mirror omnibus. But apparently, the two men have not previously met.

Ishizaka wondered if Mendoza was zooming in from Manila, and the prolific director replied, “I’m filming right now in Luzon, which is outside Manila, near the beach. So I had to take a break to participate in this talk.”

Said Nagase, “I wish we could have met in person, but I hope you’ll bring the film you’re now making to the next TIFF.”

The conversation quite naturally turned to the COVID pandemic, and the impact it’s had on the film industry. Said Mendoza, “The film industry and art were greatly affected” in the Philippines. “The theaters were closed, the actors, directors and others were jobless for some time. But because of our experience as Filipinos, we were able to bounce back. This was only one bad situation that happened, like typhoons and many others. We tend to rise from all these difficulties. We’re slowly starting to make films again now. “ 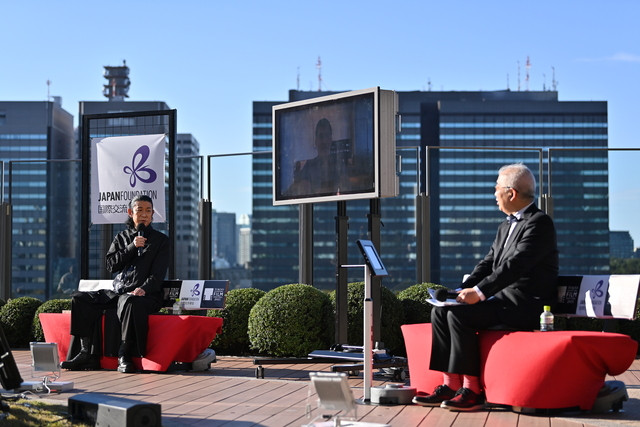 “I didn’t think it was going to last this long. I thought it would only last for a few months. Then we realized it’s already a year, and everyone started to panic. So many people, not just artists, lost their jobs. And it’s almost two years now. But we learned to cope with the situation. We cannot wait until it ends, because we don’t know when that will be. We need to stand up and do something, to make films. I think that’s the right thing to do. Otherwise, you get less creative. I think artists shouldn’t wait for the right time to create films, we should do something [when we can].”

Nagase commented, “During COVID, I believed in film. I’ve always believed in film. Once again, I had an opportunity to watch films across time, across borders. I feel like film saved me because it gave me something to do. I watched (Mendoza’s 2016 film) Ma’ Rosa when it was released. During the pandemic, when I was locked in my room, I happened to come across it again. To be that natural and real in front of the camera—the actors seemed so real, so authentic, especially Ma’ Rosa’s tears at the end, which were so skillfully done. I’m so impressed with your skills as a director. The film really represents TIFF’s Crossing Borders theme.”

Thanking him, Mendoza explained, “The actors you mention and their natural performances, they’re all professionals. The way I direct is to make a point of giving them the freedom to express themselves in the scene, especially in scenes where their lines are not that important. That’s what I’ve been trying to achieve since my very first film, The Masseur (2005). That’s what I try to do on the set with my actors.”

Ishizaka noted that Nagase himself had crossed borders when he was younger, working on films in Southeast Asia as part of the Asian Beat Project in the 1990s, including Taiwan, Singapore, Hong Kong and Malaysia.

“I was young and full of energy, on my own, visiting and spending time with local film people,” recalled the actor. “The relationships we built still continue. It was a big opportunity for me. In some countries, the film industry was in the early stages, it wasn’t that mature. Taiwan was on the rise with the Taiwanese New Wave at the time. You really felt the heat, and I was really empowered.”

Although he had not yet worked in the Philippines, Nagase said, “Hopefully the situation with co-productions will improve from next year. I would love to have that experience.”

Ishizaka asked him whether it was fundamentally different making Jim Jarmusch’s Mystery Train (1989). Responded Nagase, “Everywhere is the same, the film sets are the same, but the cultures are different and that’s stimulating. I’m still not that proficient in English, but Jim Jarmusch’s crew gave me the courage to just take the plunge. I found more similarities than differences.”

Asked about creating films with crews from different backgrounds, Mendoza noted that it’s a learning experience that “gives us a new perspective on the way we work, how we work, and collaborating with people. GENSAN PUNCH all started when I was invited to TIFF [in 2017]. I’m not saying this because I’m trying to be fawning, but it’s interesting for me how respectful the Japanese are, and the culture is amazing. That’s one of the things that really attracted me about Japan and the Japanese. I would like to shoot another project in Japan with Japanese actors. ”

Nagase was asked about his experiences shooting the 2014 baseball drama Kano in Taiwan. “Kano was a large-scale film. They created the baseball field, modeled after Koshien, and it was very challenging. The shoot ran some two to three months longer than planned. This would never happen in Japan, but I really felt like everyone was enjoying the shoot.” 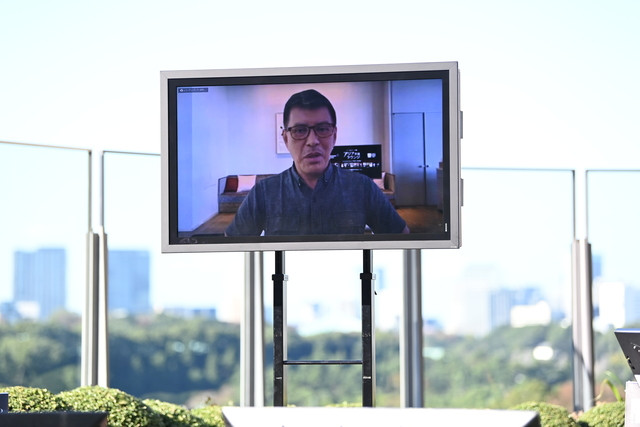 “Every time I worked with Asian directors, I was very grateful that they paid respect to Japanese culture,” he continued. “They recognized the differences, but they tried to do something new. We spent a lot of time trying to understand each other.”

“I don’t think we should stick to how we do things [at home] when we shoot overseas. I hope to really enjoy the location. On my five overseas shoots, I wanted to learn from them and absorb things. I wanted to accept the differences, which I felt would be good for me. I befriended different members of the crews, and we would have dinner together. They were really friendly to me.”

Ishizaka asked the actor whether he had any designs on directing. “No!” said Nagase immediately. “It’s hard work! But I might like to come up with a framework, and maybe I could see making a film with certain actors and a certain story. But it’s more like a producer’s job, doing that.”

Mendoza has produced the work of many emerging filmmakers, and as he explained, “I think one of the reasons I’m trying to support young filmmakers is because of what I went through. When I was starting out, I didn’t have anyone who could help me, so I know how difficult it is. Now it’s easier to make films. If I find someone who wants to make a film, I do what I can to help make their dreams come true.”

“Before the pandemic, we used to have a local film festival in the Philippines where I worked with another producer to provide financial support to young filmmakers. We helped them make their films and also show them at the festival, so they could get the right exposure and the right connections.”

Both men were asked what they’d like to see happen in Southeast Asia when the pandemic situation has improved. “At the moment, I think Southeast Asian filmmakers are making films in their own countries, rather than collaborating with others in Southeast Asia, “said Mendoza. “Of course there are film funds, but not major collaborations. I hope to collaborate more in Southeast Asia in the near future. I think what we should be doing is collaborating to enrich our participation so that we can be more prominent in the world film community.”

Said Nagase, “This may not be a new idea, but I think it’s very important to create better films so that more people can come to the theaters. We need to do our best to make great films.”

Asked how filmmakers might help “cure” people of the feelings of isolation and solitude that had been exacerbated by the pandemic, Mendoza commented, “As filmmakers, we want everyone to appreciate the films that we make. I can’t say that I make films for specific audiences. It’s difficult to make a story for a specific market or specific emotion. Film is an expression of the artist’s feelings [no matter what the subject is], how he feels about something he wants to share. The audience can always relate to a scene or two. For whatever they’re feeling, if the audience can learn from it or feel better from watching it, I’m happy.”

Returning to his recent viewing of Ma’ Rosa, Nagase said, “It really provided such a salvation for me. Mr. Mendoza’s film is very empathetic, and you feel for the characters and regardless of the differences in culture, I perceived what he wanted to put across. It’s about feeling for the characters.”

Explained Mendoza, “As a filmmaker, the first thing I do when I create the story is to consider my emotions and feelings as a human, before being an artist. Why do I feel that way about this specific story or character? What is the character going through at that moment? That’s how it connects us with the audience. If we feel these feelings as filmmakers, then we can connect, and the audience will connect.” 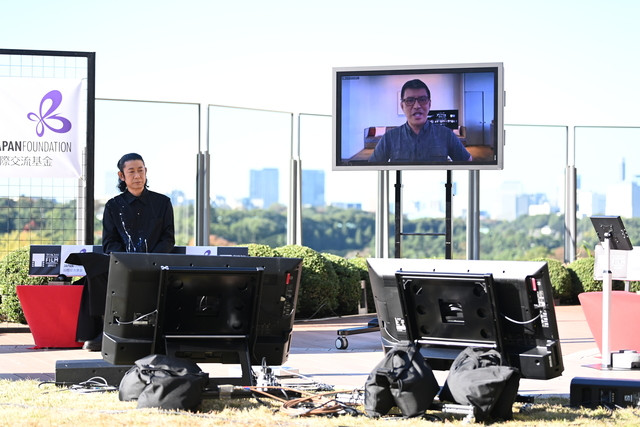 Noting that Asian Beat had been a forerunner of today’s co-productions in Asia, Nagase said, “Even after 30 years, I still maintain my contacts there. To do another series of Asian Beat is something I’ve always had in mind. I’d love to do that again.”

Mendoza waxed philosophical: “We thought the pandemic would be gone in a few months. When we realized that it would stay for such a long time, and experienced our friends and our family members starting to die, we realized we could die as well. It made me want to do what I need to do, and what I do best. It somehow gave me the energy to do the best that I can in this hard situation. I don’t want to die a lonely person, I want to die happy. Making films makes me happy.”