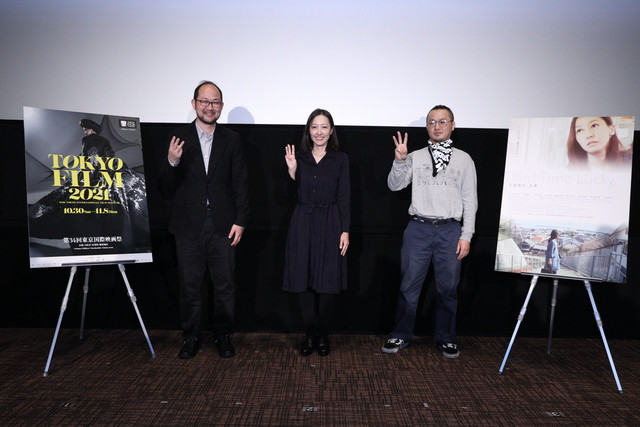 Hamaguchi Ryusuke’s Happy Hour revived international interest in Japanese arthouse cinema when it premiered to great acclaim at the Locarno Film Festival in 2015. A long, intimate portrait of the current state of interpersonal relations in Japan, it struck a nerve by delving into matters that couldn’t be conventionally articulated. Third Time Lucky, a world premiere in the Competitive section of the 34th Tokyo International Film Festival, is the debut directing feature of Nohara Tadashi, the cowriter of Happy Hour, and it conveys a similar sense of people who can’t connect, even with members of their own families.

Like Happy Hour, Nohara’s new film is set in the city of Kobe and examines various interlocking connubial relationships. At the center is Haru (Kawamura Rira), a divorced woman living with a divorced doctor whose own daughter has recently moved to Canada to attend university. Feeling abandoned, Haru splits from the doctor after he confesses to an affair, and when she stumbles on an itinerant young man sleeping in the rough who says he has no memory of who he is, she adopts him and dubs him Naruto, the name of the child she miscarried almost 10 years earlier.

This move disturbs her extended family, including her mother, with whom she lives; her brother, Takeshi (Kobayashi Katsuyuki), an aspiring rapper, and his psychologically unstable wife Mikako (Demura Hiromi).

None of these family units remain intact for long, and the development of the story involves how the various pieces recombine to create new relationships. However, Nohara doesn’t present it all in a neat, tidy way. Relationships are messy, and much of the time motivations aren’t clear. Haru spends almost half the film trying to explain her strange affinity for Naruto, whose own provenance isn’t clear either, despite an opening scene that explains a lot. When a man enters the picture claiming to be his father, the viewer wonders if Naruto is really suffering from amnesia at all. But Haru doesn’t care. More than a substitute son, Naruto is a project, and one that her relatives resent. What’s a family, after all, if it doesn’t require a great deal of emotional effort?

During the audience Q&A following a screening on November 3, most of the questions had to do with the film’s relationship with Happy Hour, which shared many cast members. More significantly, Kawamura Rira, who was in Happy Hour, cowrote the script for Third Time Lucky with Nohara, who said that they hadn’t actually finished it before filming started, and therefore had to keep revising it during the shoot.

“It was physically hard,” said Kawamura about her multitasking duties. “Sometimes I couldn’t sleep, but I don’t think the process had an effect on my acting. Actually, we were also working on another script for a different movie.” The collaboration between Nohara and Kawamura probably had much to do with the film’s even-handed treatment of male and female sensibilities.

Nohara admitted that using the actors from Happy Hour helped him better realize his vision. “I actually based my direction on what we did in Happy Hour,” he said. “It was like a template. I wanted to stay close to that feeling. I did very little direction in terms of supervising the acting, but the actors who had worked on Happy Hour knew what I wanted, and we could communicate without actually saying things out loud.”

And while he didn’t write the characters with specific actors in mind, he hired Kobayashi to play Takeshi because he’s a successful rapper in real life. “There are some differences,” he said, “Takeshi has a son, and Kobayashi doesn’t, so we had to work on that.”

Given that Kobayashi was in perhaps the most affecting scene in the movie—where Takeshi confronts Mikako’s illness and she rebuffs his professions of love by essentially saying he can never understand her—his casting in a way made the movie what it is.

“He had such an effect on us,” Kawamura said about Kobayashi’s participation. “When he was on set, the whole atmosphere changed, and when he wasn’t there, we missed him so much that we played his CD just to make up for it.”