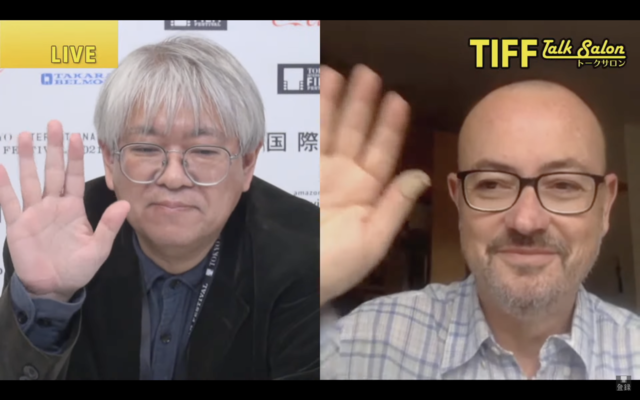 When we enter the story being told in the Spanish film The Daughter, which is screening in the Competition section of the 34th Tokyo International Film Festival, the main characters’ fates have already been sealed, and as the viewer realizes this, the movie takes on a tense, troubled air. The Daughter is very much a classic suspense thriller, though its premise is based on what director Manuel Martin Cuenca calls a “moral dilemma.” That may be an understatement.

We first see 14-year-old Irene (Irene Virguez) trudging through a mountain wilderness by herself. She eventually reaches a road where she is picked up by Javier (Javier Gutierrez), one of the tutors at the juvenile detention center where she was living after being removed from her addict mother’s care. Irene has apparently escaped from the center, so why does Javier not return her to the center? Why does he drive her to his remote mountain home? Because Irene is pregnant, and Javier and his wife cannot have children of their own.

It doesn’t take much exposition for the audience to see what’s going on and immediately become apprehensive. During the online Talk Salon session with TIFF Programming Director Ichiyama Shozo, the director insisted that he didn’t want to “take sides” in the matter of whether, as one viewer put it, the movie presents a rather extreme example of “surrogacy.” Cuenca prefers to see the theme of the film as one of “minors’ rights.”

“Irene has been betrayed by adults her whole life,” he explained, and Javier and his wife, Adela (Patricia Lopez Arnaiz), are really no different, despite their liberal platitudes and insistence that Irene can change her mind at any time. But at the start of the film, the young woman is only three months pregnant, and six months is a long time to stay cooped up in the mountains, laying low because the authorities are out looking for you. Anything can happen, and, of course, it does.

The sprawling house, which Cuenca calls a “lodge,” is perched on the edge of a scenic canyon and as much a character in the movie as the three principals. Surrounded by breathtaking beauty that also conveys forbidding danger—Cuenca said the location they chose was a good three hours from the nearest town and one hour from the nearest accommodations—the lodge, with all its shadowy corners and secret passageways, exerts its own power on its inhabitants.

“It’s located in one of Spain’s largest national parks,” the director told viewers. “It’s not a particularly well-known area and you can’t get there easily, so those qualities work their way into the viewer’s imagination and add emotional resonance to the characters’ actions.” The setting also offers a stark development of the seasons, which lends the film a vital temporal dimension, since we see Irene grow bigger with child as summer turns to autumn to winter. “The changing seasons were very important to the story and the look of the film,” says Cuenca. “And we shot it during those seasons in real time. There were no digital effects to convey those seasonal changes.”

What obviously intrigued the viewers who submitted questions was the dynamic between the would-be parents and the actual mother. One person asked if Irene was an immigrant, because she seemed to be the victim of discrimination. Cuenca said she was Spanish but, yes, discrimination was Irene’s lot because she had been raised by a destitute mother and brutalized by a child welfare system that didn’t take her emotional well-being into consideration at all. Javier, a civil servant tasked with helping her, abused his authority by talking her into giving her baby to him, and did so with what he considered the purest intentions. Perhaps the most unsettling thing in The Daughter is watching Javier, a “good person” on paper, turn into a scheming, self-deluded monster.

“Javier is a fantastic actor and well known in Spain,” said Cuenca. “He’s good at playing good persons, and developing his character was a challenge because once he crosses that line, the viewers keep asking themselves, what will he do?” As one viewer pointed out, Cuenca decided to retain the real names of the actors for the characters Irene and Javier. Cuenca laughed. “It was a trick I wanted to play on them. I’m not interested in acting technique. I want my actors to tap their own memories and feelings as reflections on the characters they are playing, and I especially wanted Irene and Javier to connect to their own experiences.”

In that regard, Irene has less experience to tap into, since she really was only 14 when she made the movie, and not a professional actress—yet. “We found her at a dance school,” explained Cuenca. “She wasn’t very extroverted. She’s sensitive and delicate with her emotions.” He paused and then noted, “It’s funny, but on the set, I called her my ‘Japanese actor,’ because I think Japanese actors are good at conveying hidden emotions, and Irene was very subtle in expressing hers.”

When asked where the idea for the film came from, Cuenca answered that he always plucks ideas from various sources, but they are usually determined by something that is happening in his own life. Earlier in the interview he hinted that he was interested in the idea of surrogacy because he and his partner once “wanted a child”, and he obviously tapped into his own memories and feelings when coming up with the script. But we can assume he didn’t approach his own situation in as mercenary a way as Javier and Adela did. That might have presented him with a “moral dilemma” he couldn’t escape.