OPEN
Return to List of News
2021.11.01 [Event Reports]
Portrait of an Artist as a Struggling Middle-Aged Man 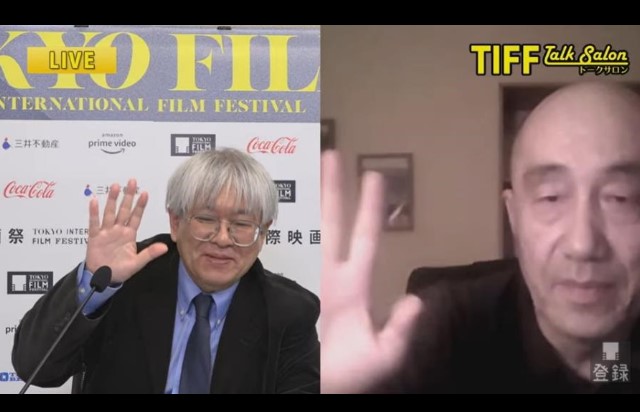 The film, a reflection on modern disconnection, concerns Didar (Yerdos Kanayev), an obscure poet in contemporary Kazakhstan. He supports his wife and child by working at a struggling newspaper. But as hilarious/tragic discussions in the office reveal, both his vocation and profession are at risk of disappearing due to the influence of social media and digital technology. Public areas are inundated with digital advertisements, people are glued to their smartphones, and even his daughter is glued to her PlayStation, displaying a lack of human communication in social and domestic spaces. Omirbaev’s floating camera captures Didar among these places like a dystopic flaneur, looking to observe humans interacting before giving up and retreating to his books or his bathtub.

While eating with his wife at a hip restaurant, Didar runs into an old classmate. Once a fervent literature student, his acquaintance is now a successful restauranteur with connections to many powerful businessmen. One of these tycoons asks Didar to write a book about his family history for a substantial sum of money.

As Didar contemplates accepting the offer and providing a better life for himself and his family, he begins reading about the poet and political figure Makhambet Otemisuly, who was executed by the authorities in 1846 for his criticism of the state. Poet crosscuts between Didar’s modern malaise and a history of Makhambet after his death, as numerous ancestors and researchers visit his grave in order to pay tribute or use the poet’s remains for personal gain.

In the TIFF Talk Salon, Omirbaev explained that he chose to contrast these two stories because, “Poets, regardless of [era], will always have something in common.”

Didar and Makhambet share a common social persecution, but also a common Kazakh heritage. Ninety percent of the film is in the Kazakh language, a conscious choice that Omirbaev says is a comment on how the world is drifting toward a single language, with many languages becoming extinct in the process. It’s a problem, notes the director, that is exacerbated by people spending less time writing and reading sentences, and more time consuming content on screens.

While Poet deals with serious themes, there is much deadpan humor. In one scene, as he searches for an answer to his dilemma, Didar visits a rural town to give a talk and is greeted with fanfare—but the hall is empty. Omirbaev says he found inspiration for the comical scene from a real-life experience attending a screening at a South Korean film festival where there were just two people in the audience: he and the director. “As artists, we always have to think about the risk of people not understanding our work.”

Omirbaev lamented the lack of film literacy among the contemporary public and what he perceives is a general downward trend of cinematic art. While he admits there is no clear solution, he also believes that film education can teach children about “good films, like those by Ozu Yasujiro or Andrei Tarkovsky.” Omirbaev was surprisingly practical in his suggestions, arguing that we could build up film literacy in students in a year if we prioritized it as we do teaching multipliers or the alphabet. “Start by showing kids good short films to give them an idea of what good films can be,” he said.

Didar and Makhambet ultimately share a mutual disdain for figures of authority who use their influence to shape the words of artists. The earlier poet’s act of rebellion costs him his life, but his legacy lives. It’s not clear whether Didar’s rejection of material comforts will lead to a similar kind of recognition, though his commitment to his art is made with a similar sense of defiance and anger.

Only time will tell whether Didar is validated, but Omirbaev admits true art is only understood by a minority of people and is not what is most popular or dominant at the box office: “Art needs to fight against something,” he said. “It’s something that appears odd, and it needs time to be fully understood.”