OPEN
Return to List of News
2021.11.01 [Event Reports]
Paying Tribute to a Beloved Master of Movement 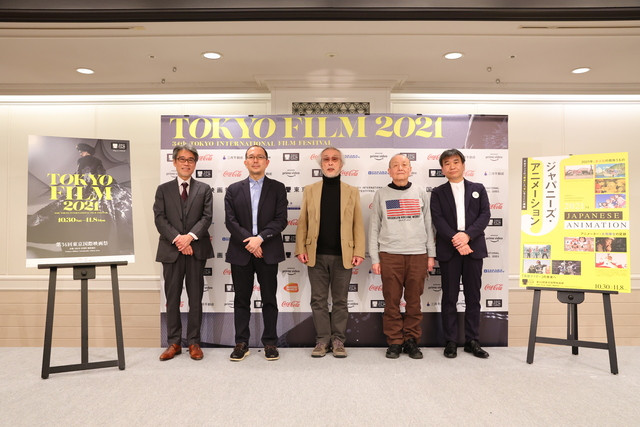 In a historic session on October 31 at the 34th Tokyo International Film Festival, legendary animators Kotabe Yoichi (Heidi, Girl of the Alps and Chie the Brat: Downtown Story) and Tomonaga Hidekazu (Space Battleship Yamato, Galaxy Express 999) were joined by animation researchers / critics Kanoh Seiji and Fujitsu Ryota for a dynamic conversation looking back on the life and work of the pioneering animator Otsuka Yasuo, whose passing in March this year shook the industry.

The four were brought together as part of the master class “The Legacy of Animator Otsuka Yasuo,” held as part of a larger TIFF tribute that will screen three films revolving around his craft: The Little Prince and the Eight-Headed Dragon (1963), Chie the Brat: Downtown Story (1981) and a documentary of Otsuka’s life, Hyouhyou: Haikei, Otsuka Yasuo-sama (2015).

Otsuka Yasuo was a seminal figure in postwar animation history, with a decades-long career spanning the origins of Japanese film and television animation that covers a protean range of titles, from The Great Adventure of Hols, Prince of the Sun (1968).

“He had a habit of suddenly popping up at work, as if he had always been there,” said Kotabe. “Seven and a half months have passed but I still feel like he’s going to suddenly appear again.”

“Like Lupin, it was difficult to grasp him,” said Tomonaga. “He had a very broad latitude.”

A central figure at Toei Doga (the original name for Toei Animation), Otsuka was there in its formative years. He was responsible for animating action sequences for the budding studio’s first feature-length animated film and Japan’s first feature-length color animated film, Hakujaden, or The White Snake Enchantress (1958), and Kotabe said watching these dynamic scenes was his impetus for joining Toei.

According to Kanoh, Otsuka’s technique excels in at least two aspects: first, his attention to detail, particularly in the research involved in his drawing of military vehicles and other modes of transportation. Tomonaga confirmed these aspects with an anecdote about Otsuka working on Lupin III: The Fuma Conspiracy (1987): “He was obsessed with the train – how passengers would board it, even the spacing of the rails.”

The second was his emphasis on the “busyness” of animation, which was a range of movements that communicated the life of an object or subject. The aim was not to create “reality,” but “believability,” convincing the spectator that the animation was alive through selective exaggeration.

Otsuka exhibited this range in his animation throughout his career, moving from violent action scenes at Toei Doga to the soft touch of the Moomin TV series to the rough and tumble character acting of Chie the Brat. “He must have drawn from many sources, which became the Otsuka style,” said Kotabe. This was a product of his intense observational ability, but also his obsession with sketching since his youth, a process that helped him to understand the construction and movement of different objects.

Otsuka also pioneered several roles in the animation production process. He was the industry’s first official animation director, a role he acquired in the vibrant The Little Prince and the Eight-Headed Dragon and which he reprised for the masterpiece The Great Adventure of Hols, Prince of the Sun.

Otsuka is historically best known for his connection to Studio Ghibli maestros Takahata Isao and Miyazaki Hayao, whom he first met at Toei Doga. Otsuka picked Takahata to direct The Great Adventure of Hols, Prince of the Sun, which would become the pinnacle of the studio’s full animation approach for its dedication to realism. The production was also famously democratic, with the directors communicating closely with various staff about their contributions to the final product.

The Great Adventure of Hols, Prince of the Sun is also known for its uplifting portrayal of a small village community rising up against a tyrannical enemy, which was a not-so-thinly-veiled shot at Toei Doga’s management for its labor practices. Otsuka was himself a union rep, and while not very effective at his job, he instilled a levity in the workplace. He would carry this charming quality with him to other studios such as A-Pro and Telecom; according to Tomonaga, he would walk around with a bottle of Coke and pour colleagues glasses if they were thirsty. He could also be heard arguing vociferously with Miyazaki when the two butted heads on animation decisions.

Otsuka is revered for his skill, but he is ultimately a beloved figure among so many animators for the ways he helped them grow and improve. He communicated the tiniest details to novice staff and was always willing to share his hard work with others. He translated a Disney handbook for animation principles into Japanese and distributed it freely to anyone he worked with. He is also responsible for writing his seminal memoir, Sakuga Asemamire, or “Drawing in Sweat,” a history of postwar animation that Kanoh says is still unrivaled in Japanese animation history.

All of the panelists agreed that while anime is now globally recognized as a popular product, there is still not enough knowledge among the public about the processes and people responsible for the works that they watch. Showcasing a figure like Otsuka, however, is a small step in the right direction, a first for TIFF to highlight not a “director” like Miyazaki or Takahata, but an animator, teacher, and pioneer in the development of animation in Japan.

Fujitsu concluded the spirited talk with an exhortation for audience members to see the films programmed around Otsuka Yasuo at the festival and, if they like what they see, they’ll hopefully want to watch and learn more about this giant of anime history.