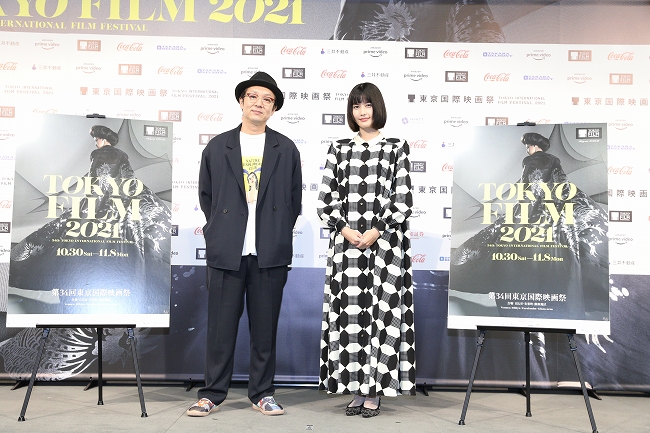 The Tokyo International Film Festival (TIFF) today unveiled the full lineup and other highlights of this year’s 34th edition, in a press conference held at Base Q Hall in Tokyo Midtown Hibiya, one of TIFF’s new main venues in the Hibiya-Yurakucho-Ginza area of Tokyo, considered the city’s center of cinema. The festival will be hosting a hybrid edition, with physical screenings and online events, from October 30 to November 8, 2021.

Festival Chairman ANDO Hiroyasu delivered opening remarks at the conference, and outlined the festival’s vision for a post-pandemic future. TIFF’s prevention measures against COVID-19 were discussed, as well as the festival’s enhanced alignment with TIFFCOM and its SDG efforts. Designer KOSHINO Junko, who created the main visuals, commented via video. TOKYO FILMeX Director of Programming KAMIYA Naoki then discussed the 2021 festival, which will once again run concurrently with TIFF, from October 30 to November 7. TIFFCOM Managing Director MATSUMOTO Hiroshi spoke about TIFFCOM 2021, running online during TIFF, from November 1 to 3.

Acclaimed French actress Isabelle HUPPERT, who will serve as the President of the International Competition Jury at the 34th TIFF, sent a message that was shared with the audience. Her fellow jurors are Director/Screenwriter AOYAMA Shinji, Film Critic/Programmer Chris FUJIWARA, Film Score Composer SEBU Hiroko and Producer/Curator Lorna TEE.

The 34th TIFF Festival Ambassador HASHIMOTO Ai then took to the stage and recalled how she had always come to TIFF in the past, one of which had changed her life (more below).

Following an introduction of TIFF Opening Film Cry Macho and Closing Film Dear Evan Hansen, new TIFF Programming Director ICHIYAMA Shozo greeted the audience and shared highlights of the Competition, Gala and TIFF Series sections. The Competition section includes 15 films*, 10 of them world premieres, selected from among 1,533 titles from 113 countries and regions, with 2 from Japan, 7 from Asian countries and regions, and 6 from other areas.
→ *The full list of Competition titles

Japanese Animation Programming Advisor FUJITSU Ryota discussed the section’s lineup, highlighting Seeing 2021 Through the Main Character, which will investigate themes portrayed in the latest animated works. The Tokusatsu Section will feature the KAMEN RIDER series, which now boasts a 50-year history.
→ The full lineup of the Japanese Animation section

Distinctive director YOSHIDA Keisuke then appeared on stage and discussed being selected as this year’s Director in Focus. He will be saluted with screenings of his work in TIFF’s Nippon Cinema Now section, a newly expanded section that replaces Japan Now and will bring more diverse Japanese films to world audiences.

Finally, world-renowned director KORE-EDA Hirokazu appeared by video to discuss the lineup of the Conversation Series at Asia Lounge, a series of sessions featuring Asia’s leading auteurs, to be co-presented for the second year by The Japan Foundation Asia Center and TIFF.

During the 10 days of the festival, physical screenings, stage appearances and Q&A sessions will be held, along with unique film-related events and online webinars featuring guests from around the world.

The 34th TIFF will be held from October 30 to November 8, 2021 at our new main venues in the Hibiya-Yurakucho-Ginza area, and other venues in Tokyo.

-Message from Isabelle Huppert, President of the International Competition Jury, 34th TIFF
It is a great honor to be chosen to preside over the International Competition Jury of the 34th TIFF, one of the most important Festivals in the world, that I have always considered with great respect. And what a joy to be welcomed again in Japan, a country with such a fascinating culture and an impressive film history. I have had the pleasure of presiding on festival juries throughout the world, and each time it is an inspiring experience to share my perspective with fellow talents, united by a common love for cinema. I wish this edition of the festival a great success and I look forward to discovering the films selected this year together with the jurors, in a theater. How lucky we are!

-Hashimoto Ai, Festival Ambassador, 34th TIFF
This season reminds me of how I would always check the listings and if I had time, come to films at TIFF. It’s been a part of my life. I was saved by watching films at TIFF. Movies helped me a lot, and I saw [Alejandro Jodorowsky’s] Endless Poetry here — I’ll never forgot some of the lines in the film. Films I’ve appeared in have been shown at the festival and I’ve been on the red carpet, too. I hope that movies and art will be a part of everyone’s life, and that the festival will reach a lot of people. I’m also looking forward to watching some of this year’s films, and I hope everyone will join me.

-Yoshida Keisuke, Director in Focus, Nippon Cinema Now section
I’m not the type of person who’s selected by important organizations, and that’s why I was so shocked that I wet my pants [from excitement] when TIFF selected me to be the director in focus. All of my films have different themes, but I’m interested in emotional changes — they allow me to depict something that I hope the audience connects to onscreen. I fell in love with movies because I wanted to see Jackie Chan. I sometimes lose interest in the cinema, but whenever I see a great film, I fall in love with movies all over again. I hope I can make films that entice people who have lost interest to renew their love with film.

-Video Message from Director Kore-eda Hirokazu, Conversation Series at Asia Lounge
This year’s Asia Lounge will focus on the theme of Crossing Borders. Because of the pandemic, we’re not sure whether the ideal form we’ve envisioned for the Tokyo International Film Festival itself or for the Asia Lounge series can actually be realized. The programming director has changed, and I think that the new form of the festival has gradually begun to take shape. I hope I can be of some help in presenting the ideal form of the Tokyo International Film Festival to film fans as soon as possible.

-Ando Hiroyasu, Chairman, 34th TIFF
Today, people around the world are suffering from COVID-19, and we also struggled at TIFF to overcome the challenges related to this year’s festival. The pandemic situation currently seems to be improving, but we cannot let down our guard. I would like to share some key points from this year’s vision. For the first time in 17 years, we’ve changed our main venue from Roppongi to Hibiya, an area that’s known for cinemas. This will allow us to reach a wider audience. The No. 1 priority for a film festival is to show as many wonderful films as possible. Our new programming director, Ichiyama Shozo, has been working hard to reorganize our sections and make sure our lineup is as good as it can be. We’re stressing the importance of an international atmosphere, and for the second year, we are holding the Conversation Series at Asia Lounge, where Japanese and Asian industry stalwarts discuss film. Although we won’t be able to hold all the conversations physically, we do have some international visitors. We will be holding a World Cinema Conference, to discuss the future of the film industry, and TIFF has also become a member of the FIAPF Festivals Committee, which will allow us to interact with our colleagues around the world. On Women’s Day in March this year, we became the first festival in Asia to sign the Collectif 5050 pledge for gender parity, and we are committed to achieving equality on our jury and our staff, and to providing greater gender parity in our film lineups.

-Ichiyama Shozo, Programming Director, 34th TIFF
It’s been over 20 years since I last worked at TIFF, and a lot of things have changed. This year, we have altered the structure of some of the sections, including the Nippon Cinema Now section, which replaces Japanese Cinema Splash and Japan Now. I wanted emerging Japanese directors to compete on a world-class level with other directors, not just have their own section, so we have included them in the Asian Future section as well as in the Competition lineup. The TIFF Series is a new addition to the festival, that will allow us to focus on online distribution, both TV series and films. Outside Japan, this type of series is already part of the scope of many festivals, including the Berlin Film Festival. We will be showing two works, both directed by women, and will expand the selection next year. Of the 15 films in the Competition Section, 11 are world premieres and 4 are Asian premieres, but what matters is the quality of the work and not the premiere status. We have not paid a great deal of attention to the regional balance, but there are quite a few Asian films, as well as films from Spain, Italy, Turkey, Kosovo and Mexico. We have 4 female directors, which is admittedly small, but more than half of the films’ main characters are female. In the Gala section, which is an outgrowth of the previous Special Screenings section, we will be showing films from other film festivals, most of which have Japanese distributors, and will receive their first Japanese screenings at TIFF. We’ve selected 10 titles, and one of them Churuli, is an Indian film that will be having its world premiere here.
previous
Panel Discussion World Cinema Conferen...
2021.09.28 [Event Reports]
next
9/30(Thu)12:00pm～pre-order lottery sta...
2021.09.30 [Updates]
Return to List of News
Recent News