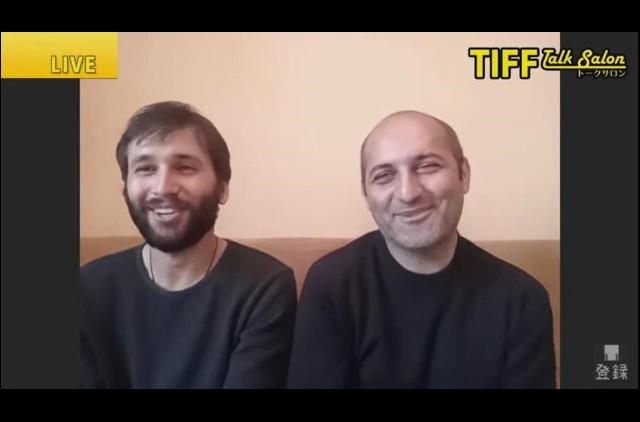 The film begins with law student Musa (Elshan Abbasov) interviewing Davud (Iskandarli), a man imprisoned for abducting four women. Curiously, none of the women seek to press charges against Davud, and Musa endeavors to understand why. The film unfolds over a series of vignettes in which Musa interviews Davud or one of his former captives, but instead of answers, gets confessions of melancholy and questions about the nature of justice.

While their themes are weighty, these lyrical monologues are stunningly photographed against the natural and manmade landscapes of contemporary Azerbaijan—shimmering lagoons, dilapidated buildings, frosty plains and, in the most frequently-seen location, scorched petroleum fields sprawled with pumpjacks bobbing up and down rhythmically. These rigs that extract oil but also sap the land of its riches stand as a visual metaphor for the film’s title, a folktale about how lanterns were once used to guide lost cranes home in the mountains, but which also doubled as a way for hunters to locate them. Will Musa find his way, or is he being hunted unaware by Davud?

Asked what prompted him to make the film, Baydarov replied, “When I want to make a film, I make a film, and when I don’t, I don’t. When I do, I call my friends and we do it.”

Crane Lantern’s production reflects Baydarov’s spontaneous process, as the film was shot without a script. In lieu of a screenplay, Baydarov visited the landscapes and wrote what lines came to him within a few minutes. He then handed his notes to the actors, who read his impromptu monologues to the camera. “It’s impossible for me to write these things at home,” explained Baydarov. “I believe in the unity of ourselves, the landscape, the time.”

Because of this desire to tie words to natural landscapes, Baydarov spent two years shooting—he is also the film’s cinematographer—so he could capture the natural seasons and the inspiration of the moment. There is method to his process: by creating words that sincerely match the environment, Baydarov insists that this gives greater meaning to dialogue, which is too often used merely for exposition. “Words are ignored too much in cinema,” Baydarov said. “Words are so magical and very few directors feel the power of the word.”

Iskandarli delivers more of these words than any character in the film. The actor also starred in Baydarov’s previous film, In Between Dying, which won the Grand Prize at TOKYO FILMeX 2020. Despite the challenges of acting without a script, Iskandarli said he didn’t find it particularly difficult. “It’s like common souls coming together,” he explained. “It all comes out naturally. I don’t force anything because I feel that moment, that pleasure.”

But for Baydarov, making the film was “painful.” Inundated by thousands of clips but no coherent way to structure them, Baydarov agonized during the editing process about which images to include in the film and which to omit. It took him over a year to arrive at the current 100-minute cut. “It was the most tortuous period of my life,” he said.

The film was produced by renowned Mexican director Carlos Reygadas, whom Baydarov termed a close friend and big supporter of his work. The two met by chance and found kinship through talking about movies. “He is one of the true masters living today,” said Baydarov.

Crane Lantern both perplexed and mesmerized audience members who contributed questions to the online session. Some of them were desperate to know more about the background of the film’s premise (the kidnappings). But Baydarov cautioned them not to get hung up on the background details. As with his other work, “The film is about the search for life’s meaning. It’s about why we exist, and the story is not that important.”